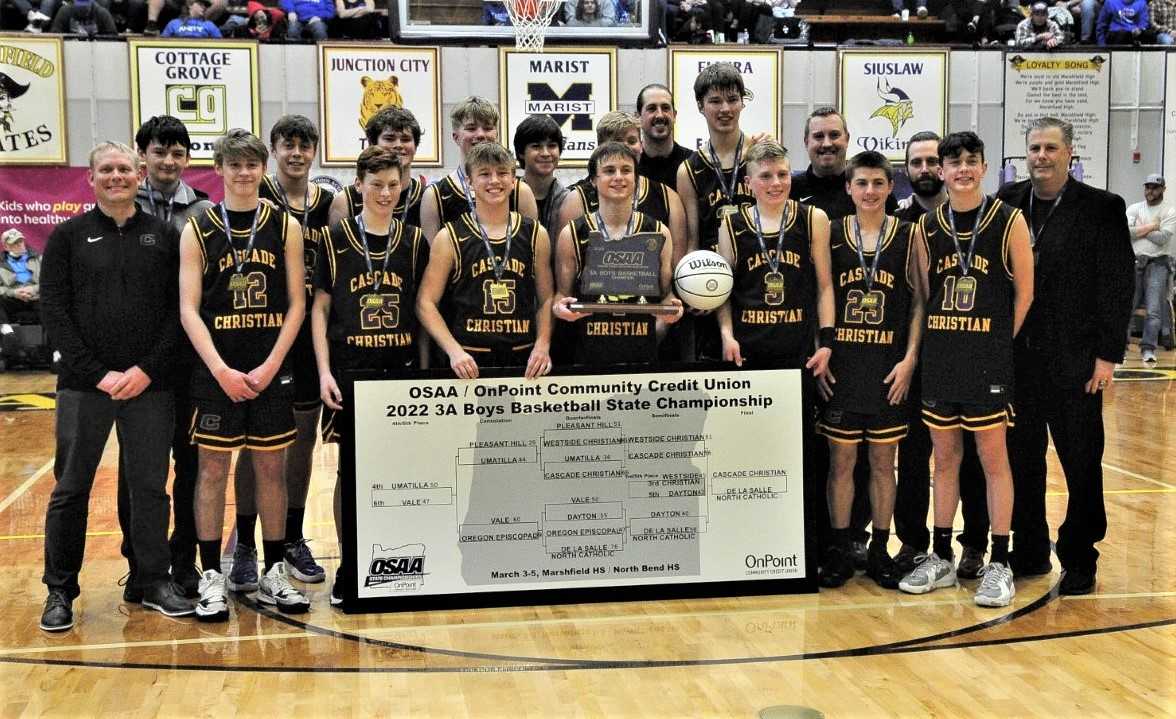 COOS BAY — Cody Reece had the net around his neck and the blue trophy in his hands Saturday night, and Cascade Christian coach Brian Morse couldn’t have been more excited.

“I am so happy for Cody Reece,” the veteran coach said after the Challengers beat De La Salle North Catholic 52-45 in the championship game of the OSAA/OnPoint Community Credit Union 3A boys basketball tournament at Marshfield High School. “I know it’s a team game, it really is.”

But after the Challengers came up short in the championship game the past two seasons, Morse wanted his lone senior — the only basketball player in his class — to have a chance to go out on top.

“My whole goal this season was to get him a championship,” Morse said.

Reece played a huge role as the Challengers built a big first half lead, saw all of it disappear in the third quarter, and righted the ship in the final eight minutes to outlast the Knights.

“It feels great,” said Reece, who had 11 points in his final game for the Challengers.

Then De La Salle, which was ice cold most of the first half and only scored two points in the first quarter, turned red hot.

The Knights missed all 14 of their first-half attempts from three-point range, but hit five of them in the second half, four by TJ Latu.

At the same time, they turned up the defense and Cascade Christian started turning the ball over, a problem that was in part due to Reece going down with an ankle injury that kept him out of the game for a few minutes.

“We started turning the ball over and panic set in a little bit,” Reece said. “We got it back together and settled down. We drew up a press break, got things going, then everything started falling.

Cascade Christian didn’t score in the final five minutes of the third quarter, with De La Salle North Catholic going in front 32-31, but finally got going again when 6-foot-11 center Austin Maurer had a put-back 30 seconds into the final quarter.

Maurer finished with 26 points, to go with 16 rebounds, scoring 12 in the fourth.

“Austin, of course, made some big shots down the stretch,” Morse said. “We were trying to get the ball in to him. Their pressure was so good.”

That pressure turned the contest into a tight game after Cascade Christian threatened to run away with it.

“We were able to settle down at halftime,” De La Salle coach James Broadous II. “We’re a great third-quarter team. We were able to go down and make adjustments.”

And the Knights started making shots and turning up the heat on defense.

“Our offense sets our defense,” Broadous said. “If we are able to score, we can get into our pressure.”

Latu made three three-pointers during a 15-3 run to finish the third quarter and finished with 21 points for the Knights. Mathias Billings added eight points and 12 rebounds and was picked for the all-tournament first team, along with both Reece and Maurer.

“TJ hit some huge shots for us. He got us going and got the crowd into it.”

Ultimately, the Challengers were able to stop the De La Salle surge.

Plus, he noted, Cascade Christian was battle tested, including beating top seed Western Christian in the semifinals.

“Cascade is one heck of a team,” Billings said.

The Challengers have a great returning group. Maurer, his twin brother Peyton and fellow starter Cannon Anderson all are sophomores. Peyton Maurer and Anderson combined for 15 points for the Challengers.

One thing the group won’t have next year is Reece.

“He’s a great player,” Austin Maurer said. “He does everything for us.

“He is going to be such a hole to fill next year.”