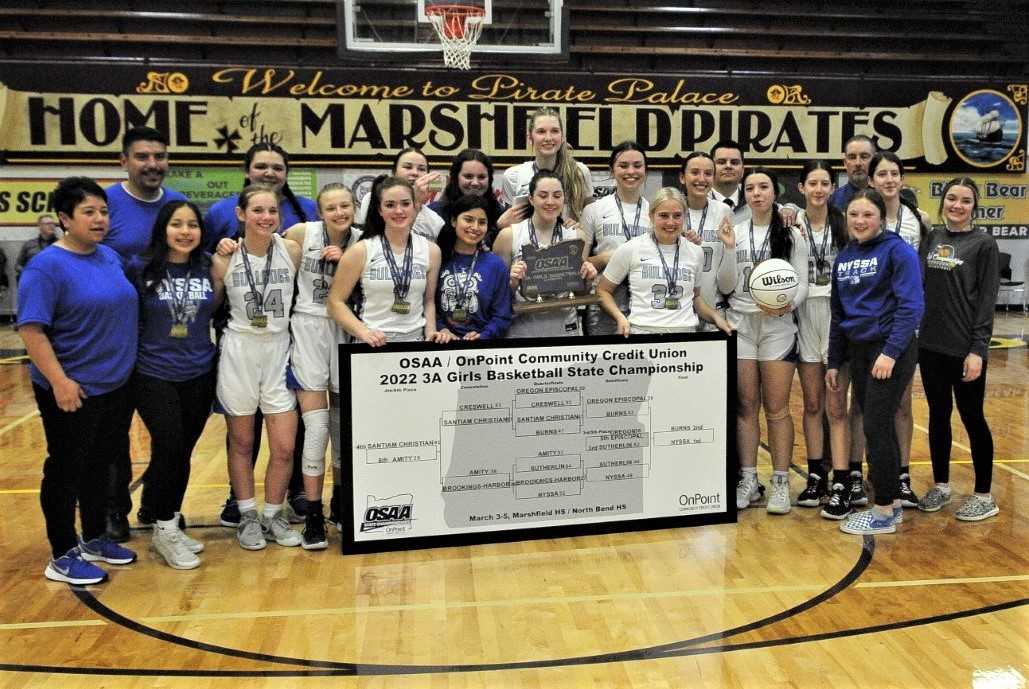 COOS BAY — Heading into the final of the OSAA/OnPoint Community Credit Union 3A girls basketball tournament Saturday night, it was certain the trophy was headed to Eastern Oregon, just not how far it was going.

As it turned out, almost to the Idaho border.

The Bulldogs had to dig deep for the title, one night after edging Sutherlin in a classic semifinal battle, coach Jeremy Chamberlain said.

“We were resilient tonight. Our legs were dead after last night.”

But Nyssa’s spirits were high after beating Sutherlin, said Laney Hartley, one of the team’s senior leaders.

“I think after we beat Sutherlin, we knew we could do it,” she said while her teammates celebrated after cutting down the net.

“It’s so unreal, I feel like we really proved we can do anything when we set our minds to it.”

Nyssa overcame an early deficit and came up with some huge shots in the fourth quarter to get some separation against their rivals.

Hartley hit two of those, a jumper from the elbow and a three-pointer that turned a one-point lead into six, a deficit Burns couldn’t come back from on a night when points were hard to come by.

“She struggled to score tonight, but she hit a couple of big shots,” Chamberlain said.

Hartley’s baskets were huge, as were shots from several teammates on a night when Burns was double- and triple-teaming Nyssa’s 6-foot-5-inch center Gracie Johnson.

“We knew once Gracie got the ball, they would triple team her and someone would be open,” Hartley said. “Gracie did a good job, not just scoring, but getting the ball out (to us).”

Johnson did finish with a team-high 12 points, along with 14 rebounds, but the four points from Brooklyn Johns and three each from Clarita Arizmendi and Malerie Long were huge.

“We have other teammates on our team who can score,” Johnson said. “We have a super deep bench.”

A key to the win, Johnson said, was Nyssa’s defense staying tough when the offense was struggling in the first half.

In the second half, she said, the Bulldogs were still intense on defense and better on offense.

They needed it against the strong effort from the Hilanders.

“Burns did a good job,” Chamberlain said. “They had a good game plan and executed it well,

“We had a couple players dig deep, come up with a steal and a couple of big baskets.”

While the Bulldogs were elated, the Hilanders were understandably disappointed, but also proud of playing in a championship game that came down to the final moments.

“I wish we could have come out on top,” said Burns senior Kaya Dobson. “I’m so thankful and so proud of my team to get here.”

Dobson had a big game for the Hilanders, finishing with 12 points, and Kaitlyn Wright, another senior, had 10. Freshman post Akylah Kaino was held to four points, but grabbed 10 boards.

“It’s a chess match offensively,” Burns coach Kris Sanders said. “We know each other so well. It was tough finding the basket.”

The team’s effort, he said, was outstanding

“The girls did everything they could to try to get a W,” Sanders said. “It came right down to the end.”

He said he was proud of his team’s effort against a squad it had already faced three times, including two losses, the latter a two-point setback in the league playoffs.

Ironically, it was the first meeting between the teams that turned Nyssa’s season around, Chamberlain said.

“At Christmas time, we were winning games, but we weren’t playing together. Then we went to Burns and got beat. That was the turning point of our season. We got together in the locker room after the game and got some things figured out.”

Ultimately, the result was the state title.