1A boys basketball final: For Crane, first title is perfection
Tweet
The top-seeded Mustangs complete a perfect season by defeating No. 3 South Wasco County 62-53 in a battle of unbeaten teams
March 6, 2022 by Staff Writer, OSAAtoday 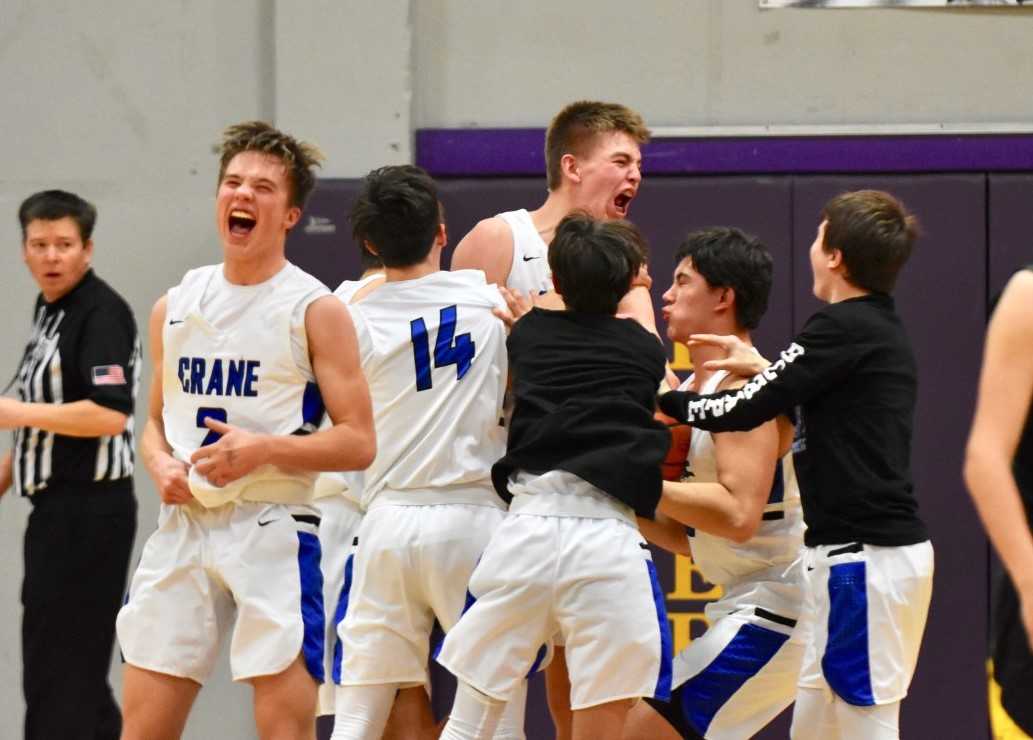 BAKER – With the pressures starting to stack up on their shoulders, the top-seeded Crane Mustangs shrugged off the weight and soared.

Facing the prospect of capping a perfect season with their first state title, the Mustangs responded to a valiant rally by South Wasco County with an 11-3 run to win 62-53 in the final of the OSAA/OnPoint Community Credit Union 1A boys basketball tournament before a packed crowd Saturday night at Baker High School.

“This is a feeling I’ve never felt before,” Eric Nichols, Crane’s second-year head coach, said as Mustang fans thronged the court in jubilation. “These boys,” he said, his voice trailing away as though he couldn’t summon the words to describe their accomplishment. “It’s a great group.”

After spotting the third-seeded Redsides (25-1) the first basket, Crane (31-0) was ahead for almost the rest of the way.

The Mustangs led 21-12 after the first quarter, but then South Wasco County’s electrifying senior guard, Oscar Thomas, took over.

Thomas scored 12 straight points for the Redsides in the second quarter as South Wasco closed back to within 30-24. Thomas scored both inside, with a couple of tough runners in traffic, and with a pair of three-pointers.

Crane’s Ty Taylor hit a 12-footer at the buzzer to give the Mustangs a 34-28 lead at halftime.

South Wasco’s Ian Ongers scored the first two baskets of the third quarter to get the Redsides to within 34-32, the closest they had been since the first quarter.

Crane’s Jared Zander swished a 16-footer to push the Mustangs’ lead back to 41-36, but Thomas hit another three-pointer and then found Ongers with a nifty pass for a basket that tied the score at 41 with 2:50 left in the third quarter.

Crane responded with a 6-0 run capped by Zander’s three-pointer, and Crane freshman Cody Siegner scored inside to boost the lead to 49-42 at the end of the third quarter.

Siegner also scored the first basket of the fourth period to push the lead to 51-42.

But the Redsides responded with a quick 8-0 spurt, capped by Brock LaFaver’s inside basket that cut the lead to 51-50 with 5:31 left.

It was almost all Crane after that.

Sophomore point guard Carter Nichols (the coach’s son) weaved his way inside and lofted a shot over 6-foot-6 LaFaver, off the glass and through. Nichols also drew a foul and made the free throw to give Crane a 54-50 lead.

Zander then made consecutive three-pointers in a little more than a minute, the second, from the left corner, giving Crane a 60-52 lead with three minutes left.

Zander, a junior who had four three-pointers overall and led Crane with 16 points, credited his teammates for making his two key shots possible.

“They found the open guy and it happened to be me,” he said.

Nichols had 15 points for Crane. Siegner and Mitch Clark added 11 each.

Thomas led South Wasco with 20 points, and LaFaver had 19.

Eric Nichols said South Wasco was “outstanding,” but he credited his team for responding to every Redsides rally.