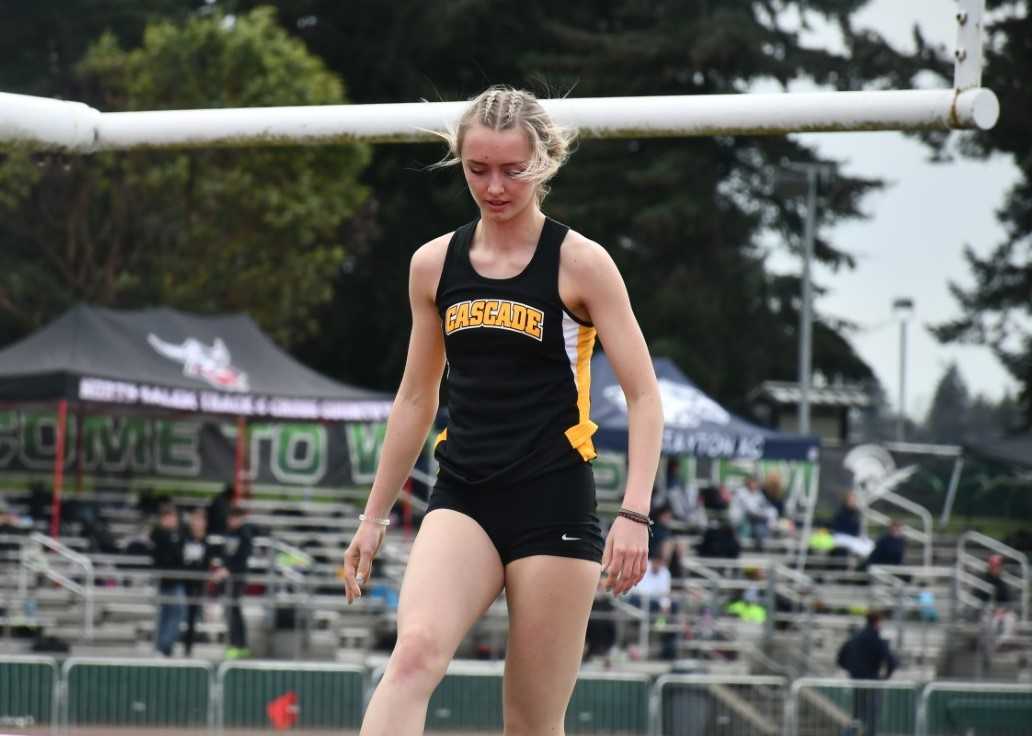 Emma Gates, a two-time 4A high jump champion, picked up a PR at an indoor meet in February. (Photo by Jeremy McDonald)

It's not as if Cascade senior Emma Gates doesn't already have an impressive resume for her high school track career.

But it's tempting to consider what she might have accomplished, up to this point, had her career not overlapped with the COVID-19 crisis.

“Sometimes I think that I might be at a little bit of a disadvantage compared to other athletes who got the full season all the way through it,” Gates said.

“But also I think that I had to find other ways to stay active and stay where I was. So I feel like I probably got stronger in other areas that I wouldn't have. It's almost like pros and cons.”

Gates finally will get a full season as a senior, though. And she wants to make it count before heading off for a college career at Arizona.

Gates is going after the state high jump record of 6-1, set by West Albany's Rachel Proteau in 2013. Gates cleared 5-11 as a junior and improved to 6-0 in February at an indoor meet at the University of Washington. So far this season, she has the best mark in the state for all classifications at 5-9.

“I'm hoping pretty soon here I can get to that record,” Gates said. “Six foot has been my goal for a while. Just trying to get over that, it's kind of like a roadblock, honestly. Probably next I'll aim for 6-1, and after that, I'll see where I can go.”

“She has a lot more in her,” Gehley said. “She's going to bloom when she hits Arizona. I'm so excited for her to see where her career goes. She has a great mental set. She is a very controlled, composed athlete. She's so smart. She can really see the big picture.”

In the shortened 2021 season, Gates had high hopes after hitting 5-11 in her second meet but managed just 5-6 in the district and state meets. She said she was hindered by a heavy workload of events at the Oregon West Conference district meet and by windy weather in the state meet at Siuslaw.

“It was difficult because the wind was blowing directly against us,” she said. “The end of the season didn't go fantastic, but overall I'm still happy with it. Hopefully this year we'll have a little bit better weather. With it being a longer season, too, I'll have more chances for it to be better weather.”

“I hadn't really had the chance with COVID to know how to deal with prelims and finals very well, so I feel like I probably could've done better at those,” Gates said. “I didn't expect to make it that far in both of them, so I was happy with the results.”

The school-record time of 25.35 in the 200 represented a dramatic improvement from her previous best of 26.11.

“I was not expecting it at all,” she said. “It was just a great day for me running. I'm looking at that time this year, too, and seeing if I can get there.”

“At Arizona, I'm planning to probably only jump, so I'm just having fun with this last season and seeing with the running events what I can do,” Gates said.

“She's just so dang athletic,” Gehley said. “We're kind of playing around with some sprinting events. We know she can high jump, but she's so fast. When you watch her run, it's just beautiful.”

But the high jump remains the primary pursuit for Gates, the middle blocker on Cascade's state champion volleyball team in the fall. She is taking a patient, measured approach to the season.

“Mostly just staying consistent and just finding the right day and the right time,” she said. “I was looking at making my approach a little bit longer, but I think I'm just going to wait until next year to do that.

“I'm working on little details and getting everything tuned in. Hopefully, one of these next meets I can get a day that just fits right and I can get to that height.”