Softball: For Astoria, win over Banks 'a long time coming'
Tweet
Rising Astoria, tied for No. 5 in the 4A coaches poll, had lost 36 consecutive Cowapa League games to Banks going back to 2008
April 10, 2022 by Jerry Ulmer, OSAAtoday 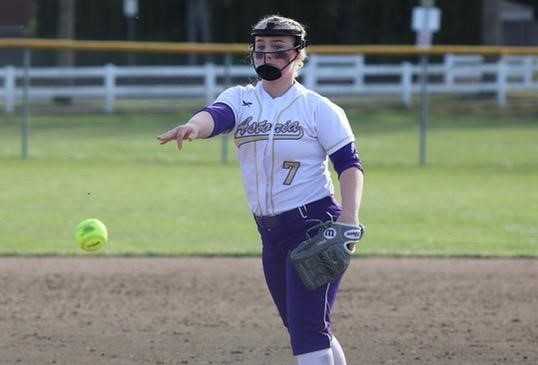 For years, Astoria's softball team was little more than fodder for 4A powerhouse Banks, routinely losing Cowapa League games to the Braves via the mercy rule.

Astoria narrowed the gap on Banks in 2019, however, dropping all three meetings by one run, and had an even better team heading into 2020 before the season was canceled.

“The COVID year, we were thinking we were going to get over the hump and actually get by them, but we never got to play,” Fishermen coach Junior Israel said.

Astoria finally overcame its longtime nemesis Thursday, winning at Banks 8-4. Astoria had not beaten the Braves since 2008, losing 36 consecutive games in the series.

“It's been a long time coming,” Israel said. “It means everything to our program.”

Freshman Maddie Wilkin pitched a five-hitter with 12 strikeouts and two walks for co-No. 5 Astoria (9-2, 2-0) against No. 3 Banks (2-5, 0-2). Freshman shortstop Nayomi Holmstedt went 4 for 5 with a double and senior first baseman Tenley Matteucci went 3 for 3 with a triple and four RBIs as the Fishermen rapped 13 hits.

If Astoria's players lacked perspective on the win, it wasn't lost on the coaching staff. Assistant Libby Di Bartolomeo was a senior pitcher for the team in 2016, Israel's first season as coach. Assistant Lou Marconeri was the head coach from 2009 to 2015.

“Libby was as excited as those kids to beat them, because they had whooped us for so many years,” Israel said. “And the same with Lou.

“In all my coaching, I had the worst inning I've ever had on Banks' field. Banks is an awesome program. We're super excited. But we need to move on to the next game. We've got to play them two more games, and they'll be looking for redemption, for sure.”

The offense has been dynamic, averaging a 4A-high 13.3 runs per game.

Freshman center fielder Shelby Bruney, the Cowapa co-player of the year in basketball, is hitting .688 with three doubles, four triples, two home runs, 23 RBIs and 27 runs. Matteucci, a starter since her freshman season, is batting .474 with five doubles, three triples and 22 RBIs.

Astoria has won nine in a row since opening the season by losing to 3A No. 5 Yamhill-Carlton 10-0 and Estacada 14-13. In those games, the Fishermen were still adjusting to the loss of senior catcher Mollie Matthews, who injured her knee in the basketball playoffs and is out for the season.

Astoria did not have a backup catcher, so Wilkin filled in behind the plate against Yamhill-Carlton and Walter pitched. Duryea, who hadn't played catcher since the sixth grade, caught against Estacada, allowing Wilkin to return to the circle.

“The first couple games with the catcher, we pretty much just threw a lot of fastballs,” Israel said. “But now we're starting to work into the rise, because she has to learn how to catch that stuff.”

Israel said that Duryea has “blossomed” as a catcher, gradually opening up Wilkin's arsenal.

“We're just now starting to use our changeup more because she's starting to figure out how to catch it,” Israel said. “We haven't thrown a lot of stuff because we're trying to keep the catcher clean as much as we can as she comes along.”

Astoria went 16-8 in 2019, losing in the first round of the playoffs to Junction City, and finished 7-7 last year. The way the Fishermen have started this season, they have designs on their first league title in the Cowapa, where they have played since 1981.

“Our goal is to be in contention and hopefully win a league title, see where we can go in the playoffs,” Israel said. “It's a good start, getting Banks. But like I told the girls, 'Don't be too excited, you've got to expect it, too.'”