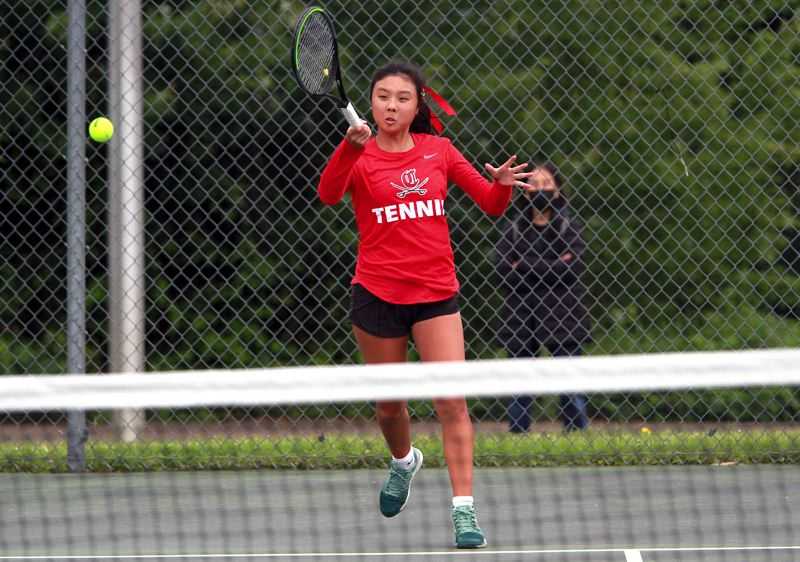 As a five-star recruit, Clackamas sophomore Lauren Han is no stranger to playing in high-level tennis tournaments.

About twice each month, Han hits the road to play in national-caliber events. And she has done well enough to improve her sophomore class ranking to No. 68 in the nation and No. 1 in the Northwest, according to the Tennis Recruiting Network.

But Han's impressive resume still doesn't include a high school state tournament. She will be looking to make her mark this year for Clackamas, which has never had a girls state finalist in singles or doubles.

“I guess state is one of the most exciting parts of high school tennis,” Han said. “That's what people tell me. So I'm really excited for that. We'll see how I do. I think I'm going to perform well.”

Han won the Mt. Hood Conference district title as a freshman, leading the Cavaliers to their fifth consecutive district championship. Without a state tournament, though, she didn't get a chance to pursue a state title.

The 5-foot-4 Han has excelled on the junior circuit this year. She won a doubles title at a Level 2 tournament in Texas this month and she placed fifth in singles at a Level 3 event in Las Vegas in February, playing up in the 18-and-under division.

“Lauren is the type of player that doesn't come around often,” said Marco Pineda, her personal coach at Multnomah Athletic Club, “and I have coached several nationally ranked and state champions over the last nine years here in Oregon.”

Han began playing tennis at age 5 when her father, Danny, gave her a racket. She trains with her father “almost every day” but also receives instruction from former Gonzaga player Pineda in sessions at MAC and Lewis & Clark College.

Han has been dedicated to the sport from an early age.

“I wouldn't say I thought I would be good, but it was more like I knew if I kept practicing, that I would improve,” she said. “When I was younger, I didn't focus on winning, it was more on making my game good, for later, like I'm winning now.”

Pineda praised Han for her approach to the game.

“Lauren is such a competitor. She is the real deal,” he said. “She plays aggressive and has the sense of just hitting shots that really only the best players can and will go for. That takes a lot of confidence in herself and her game.

“She is a one of those players a coach would say is a 'coach's dream.' She works hard, has amazing support from her family, and she doesn’t back down from a challenge.”

Han has yet to be challenged through five matches in the high school season, not dropping more than two games in a match. But she is well aware of the competition she is likely to face at the state tournament May 19-21 at Tualatin Hills Tennis Center.

Westview junior Neena Feldman, also a five-star prospect, will be a threat. Among juniors, Feldman is rated No. 1 in Oregon, No. 3 in the Northwest and No. 71 in the country.

Han has beaten many of the other highly regarded players in the state in junior tournaments, but has not defeated Feldman in a handful of matches. In their last meeting two years ago, she lost to Feldman 10-8 in a third-set tiebreaker.

“I'm hoping to play her at state,” Han said. “I feel like I've improved a lot from last time. It motivated me to improve the aspects of my game that maybe caused me to lose that match. I just made some loose errors in the tiebreaker that I could've cut out.”

Han believes she has made big strides in the mental game.

“I feel like I'm a lot better at dictating and building the point better, instead of becoming impatient,” she said.

Han has had plenty of success against many of the other top contenders, including Westview seniors Riho Iijima and Karolina Dobiecka, Jesuit sophomore Carissa Gerung and Jesuit junior Mishi Batinkova.

Pineda said that Han is “definitely one of the favorites, if not the favorite to go for a state title in singles. … She has seen it all so she won't be and isn't surprised by any player.”

After the high school season, Han will be busy on the summer junior circuit. She plans to play in the USTA National Clay Court Championships, one of the biggest tournaments of the year, July 10-17 in Huntsville, Ala.