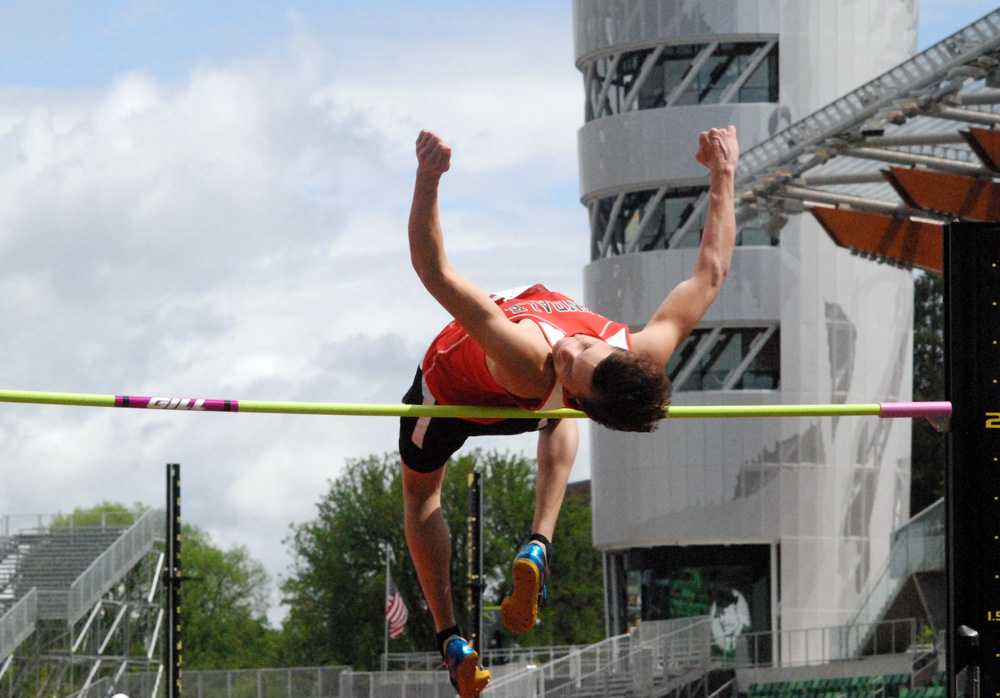 Elijah Wytcherley of Glendale barely misses on a meet record high jump attempt at 6-8 1/4. The senior won the high jump at 6-6

EUGENE -- Glendale senior Elijah Wytcherley had been picturing winning the 1A high jump all year.

He had good reason, as his personal record of 6-7 was five inches better than the best of the rest of the field at the OSAA / OnPoint Community Credit Union Track & Field State Championships, which began Thursday at historic Hayward Field on the campus of the University of Oregon in Eugene.

Wytcherley passed at the opening height, then decided to get loose at the next height of 5-10.

He missed. The crowd gasped.

He missed again. The crowd got quiet.

One more miss and Wytcherley, the overwhelming favorite, would be out of contention.

“I was freaking out,” he said. “I might have worked out a little too hard before State. My legs felt like noodles and I didn’t have that much spring for high jump.”

Wytcherley easily cleared on his final attempt, jumping with maximum effort to make sure he got over, then cleared 6-0 on his first attempt as well.

At 6-2, with just three jumpers left in contention, Wytcherley again missed on his first two jumps.

“My legs feel dead,” he yelled to his mom and dad.

Meanwhile, Prairie City junior Eli Wright was over at 6-2 on his second attempt, matching his personal record.

“We’ve been waiting to get here and show off what we can do,” Wright said.

Wytcherley managed to get over the bar at 6-2 on his third attempt. That elicited a heavy sigh of relief. He then cleared 6-3 on his first attempt. So, too, did Wright, for a new PR.

Wytcherley missed on his first try at 6-4, but Wright made it, setting another personal record. He told his parents that he had no spring or energy.

“I had to put everything aside and go for it,” Wytcherley said. The senior cleared the height on his second attempt to match Wright.

The bar now at 6-5, Wytcherley exhibited great speed in his second approach, which resulted in a clearance.

Wright missed on his first two attempts. It appeared that the competition would end here, but Wright cleared the bar on his final attempt, establishing his third PR of the day!

“My dad’s my coach; that got me and my dad pumped up the most,” Wright said.

“I didn’t think he was going to jump that high,” Wytcherley said. “Congrats to him. Once we go to around 6-5 there was a lot more pressure.”

Now at 6-6, Wytcherley grazed the bar on his first attempt, but the bar did not fall. Now the pressure was on Wright to duplicate.

“Rather than him having a chance to clear it and putting the pressure on me, it was nice to put the pressure on him,” Wytcherley said. “I think I started figuring out my steps better at the higher heights.”

Wright came close but could not get over the bar on his three attempts.

“I can do better next year,” Wright said.

Wytcherley, having clinched the state title, had the bar set to 6-8 1/4, which would establish a new meet record. He came closest on his final attempt, but it was not to be.

Wytcherley went from the high jump area to the long jump, where he was the pre-meet favorite. He jumped 20-01 but came up an inch short in his quest to double in the jumps. Junior Keith Gaskell of Days Creek set a personal record of 20-02 to take the title.

“I didn’t feel good at all,” Wytcherley said. “My legs felt weak the whole time.”

Wytcherley qualified later in the day in the preliminaries for the 110 high hurdles and 300 meter hurdles. Perhaps he was motivated by his failure to win the long jump.

“I’ll have to try to win both the hurdle events to make up for it, because I really wanted to win that,” he said.

For St. Stephen’s Academy senior distance runner Colin Friend, it wasn’t a matter of winning the 1A 3000 meter race; it was whether he could do it in record time.

“When we saw Stevens run at Hayward, there was a sense of disbelief; that he was a generational talent,” noted coach Tim Tsuei.

Friend, whose PR was 35 seconds faster than anyone else in the race, set out to make beating Stevens’ record his goal.

“He was such a great athlete and an inspiration,” said Friend, who will run for Duke University next year.

Friend said that he went out too fast. There was never a doubt that he would win. Could he break the record?

As Friend made the turn for home, the record was within sight. The crowd got excited. Friend ran like the wind despite starting to cramp. He collapsed as he breached the finish line and lay on his back as the announcer told everyone that Friend’s official time, 8:37.78, was a new meet record!

“I’ve been prepping for this meet for a long time,” Friend said. “I’m very thankful. It meant the world to me to break his record.”

Coquille junior Trinidy Blanton was the 2A javelin favorite but found herself sitting in fourth place with one throw to go. Annabelle Brawley, the volleyball and basketball star from Salem Academy, had uncorked a personal best throw of 119-3, almost nine feet more than Blanton had managed through five throws.

Throwing into a freshening wind, Blanton let it fly.

“I’d been watching the two white lines and you could see how far the girls were throwing between the two lines,” she explained. “I knew I needed to get closer to the second white line. I knew as soon as I threw it. It felt way better than all of my other throws. I saw it get a lot closer to that line. I knew it was a good throw, an improvement on my others.”

Blanton improved by almost 12 feet, edging Brawley by three feet. She was expected to contend in the long jump as well, but never threatened. Whitley Stepp of Regis won in a personal record jump of 16-0 3/4, more than one foot better than Blanton, who finished fourth. Blanton will have two more events tomorrow, the 100 and 200. She is a favorite in the 200.

Columbia Christian senior Makena Houston did not make the state meet in the 3000 meters when it was last held officially in 2019. Last year, at the 2A culminating event, she ran her slowest time of her season.

Needless to say, she had something to prove.

Prove it she did!

Taking the lead from the start, Houston powered around the track at Hayward in a time of 10:11.99, a personal record and state meet record by more than 10 seconds.

“I was kind of hoping that I’d come to Hayward and it would be everything that people talked about: the Hayward Magic and what not,” Houston said. “I would say it was. It really was like a magical place. I could feel the crowd and its energy. I accomplished what I set out to accomplish.”

Willamina junior Hallee Hughes won the discus and had top-five finishes in the javelin and shot put last year at the 3A culminating event. She was favored in both the discus and javelin and prevailed in each by comfortable margins.

The javelin was her first event. Four of her six throws exceeded 130 feet. No one threw even one within 15 feet of her. Hughes’ final throw was her best: 138-1.

“It finally came together at the end,” she said.

Hughes went from javelin to discus and essentially duplicated her win. Her first throw was almost six feet better than her closest competitor. She ended up throwing 128-10 on her third to win by more than 13 feet.

Hughes will compete in the shot put on Friday. She won’t be the favorite, but who knows?

“I’m ready to win,” she said. “If I won all three that would be amazing. I would definitely want to come back next year and do it all again.”

State champions on Day 1 of the two-day 1A girls meet included sophomore Sophie Hulke of Sherman in the discus, freshman Ava Mai of Damascus Christian in the long jump, sophomore Kortney Doman of Crane in the high jump, senior Emily Powers of Damascus Christian in the javelin and Condon senior Kallyn Wilkins in the 3000 meter run. Hulke, Doman and Condon won as favorites. Wilkins set a person record of 11:32.18 in winning by 32 seconds. Mai set a personal record long jump of 15-10 3/4 to edge junior Julie Roth of North Lake, who also set a personal record, by an inch.

Other state champions on Day 1 of the two-day 2A girls meet included senior Laura Young of Monroe in the discus and sophomore Olivia Boyd of Gervais in the high jump. Both were favored to win but won narrowly, Young by a little more than a foot over Santiam junior Emma Longfellow; and Boyd by an inch over long jump champion Stepp.

Other state champions on Day 1 of the two-day 3A girls meet included Cascade Christian junior Autumn Murray in the long jump, Catlin Gabel freshman Caroline Mauro in the high jump and Catlin Gabel senior Megan Cover in the 3000 meters. Murray and Cover were both favorites and won handily. Mauro, whose personal best coming into the day was 4-8 in the high jump, jumped 5-3 to edge Sutherlin’s Mallory Turner, who also jumped 5-3. Mauro missed her first attempt at 4-8 but did not miss again until the bar was at 5-4. Turner, a senior, missed at 4-10, twice at 5-1 and once at 5-2 to lose the tiebreaker.

Other state champions on Day 1 of the two-day 1A boys meet included Days Creek senior Greg Reedy in the shot put and freshman Sawyer Dean of Trout Lake in the pole vault. Reedy was the favorite. Dean’s winning vault of 13-2 was just four inches shy of his personal best.

State champions on Day 1 of the two-day 2A boys meet included Bandon senior Trevor Angove in the long jump, Bandon senior Hunter Angove in the pole vault, senior Cameron Diacetis of Regis in the shot put and Enterprise senior Zac Knapp in the 3000 meters. Trevor Angove edged favored Zak Holsey, a Waldport senior, by an inch, jumping 20-2 1/4. Hunter Angove, Diacetis and Knapp were all favorites. Diacetis put the shot over 50 feet to win by more than four feet. He set a new personal record in the process. Knapp blew away the field to win in 8:40.32. He set a new meet record, eclipsing a mark that had stood for 10 years.

Other state champions on Day 1 of the two-day 3A boys meet included La Pine senior Stephen Machin in the shot put, Harrisburg sophomore Terek Logan in the pole vault, Riverside senior Sam Veverka in the long jump and Warrenton senior Zander Moha in the 3000 meters. Logan set a PR in his win, which was 18 inches better than his previous best vault of 11-0. Veverka was favored and soared over 20 feet. Machin won easily and said he felt good about his performance. Moha ran with a pack of six for most of the race before pulling away in the last 150 meters to edge Santiam Christian’s Benjamin Bourne.

De La Salle North Catholic sophomore Mia Rhodes, who had the fourth fastest 3A time in the state in the 100-meter dash, was leading her heat when she fell hard to the track. She got up to finish the race but did not qualify for the final and appeared to be favoring her right arm after the race.