2A/1A softball final: Lakeview mows down No. 1 Grant Union
Tweet
The No. 7-seeded Honkers turn back the Prospectors 5-3 to win their first title, get payback for a doubleheader sweep in April
June 3, 2022 by Jerry Ulmer, OSAAtoday 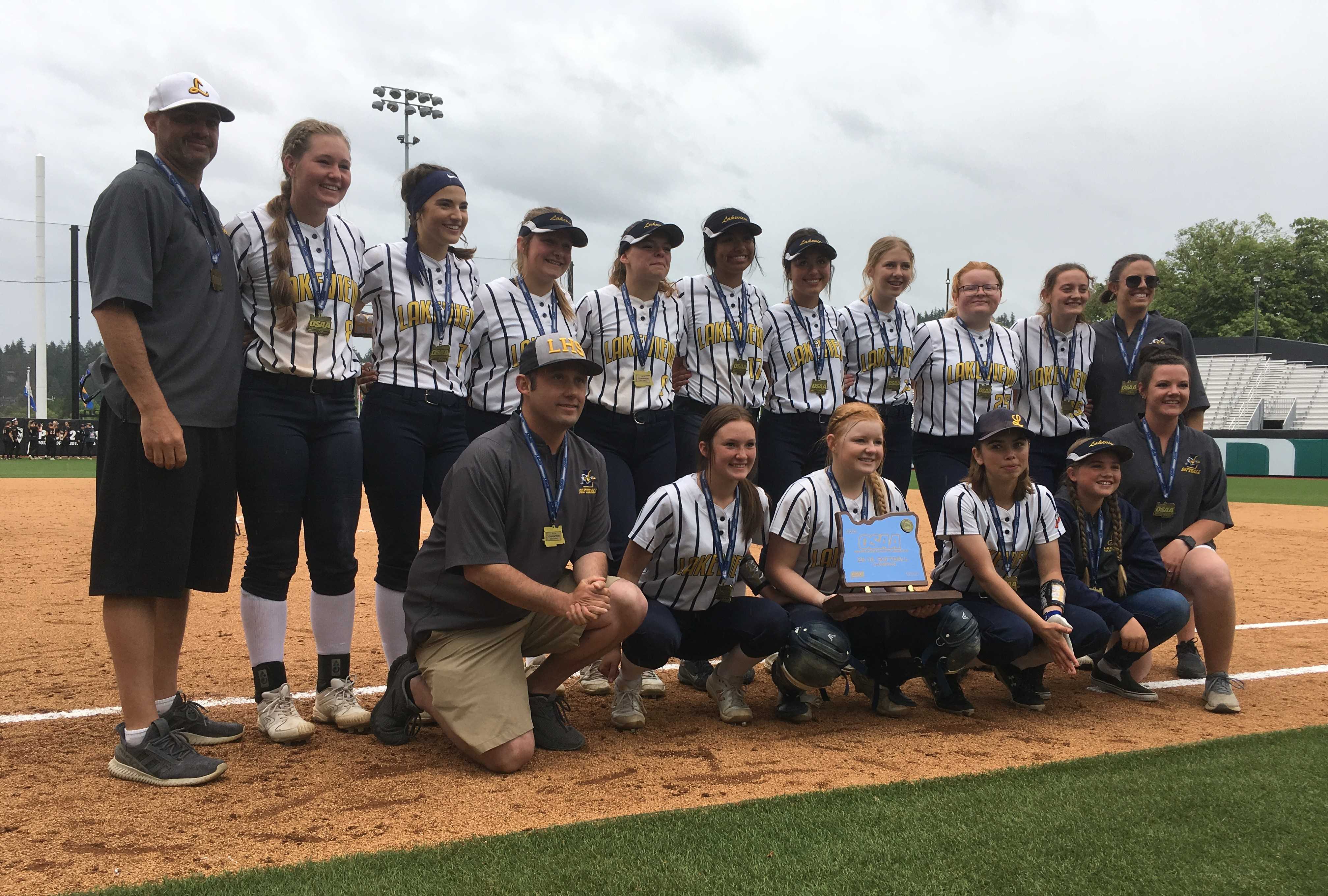 EUGENE – On a day when top-seeded Grant Union/Prairie City committed six errors, it was a defensive gem by Lakeview that highlighted the Honkers’ 5-3 win in the OSAA/OnPoint Community Credit Union 2A/1A softball final Friday at the University of Oregon.

Lakeview’s one-run lead in the sixth inning was in peril when Grant Union sophomore Halle Parsons – with a runner at first base -- ripped a double over the head of junior center fielder Jaila Jackson.

Jackson collided with the outfield wall near the 220-foot sign and fell, but got to her feet quickly and threw to junior shortstop Bridget Shullanberger, who threw out senior pinch-runner Paige Weaver at the plate from shallow left field.

“It was kind of funny because Jaila hit the wall and I’m trying not to laugh, because I know Jaila’s laughing,” Shullanberger said. “So I get the ball and I’m trying to think, ‘OK, is it going to third or home?’ When I got the ball, I just delivered it as quick as I could.”

“I thought it was going over, and I got a little scared,” Jackson said. “I ran into the wall and bounced off of it. We’ve been working on all of that a lot, so that’s a big deal for us to make a play like that.”

No. 7 Lakeview (25-4) escaped the inning with a 3-2 lead, added two runs in the top of the seventh and held on to beat the Prospectors (26-2) to claim its first state championship.

Jackson went 2 for 3 with an RBI double and a sacrifice fly, junior Annikah Tacchini and freshman Raven McLain drove in runs and Shullanberger had two hits for the Honkers, who had a 9-8 edge in hits. Junior pitcher Tyler McNeley struck out 10 to keep explosive Grant Union in check.

It’s the first title of any kind for Lakeview since the girls track team shared the 2A championship with Oakridge in 2008.

“It’s unreal,” McNeley said. “Our whole town is rooting for us. The whole town was watching us. Our first home playoff game, we had fans lined up down the fences.”

The Honkers were determined to make a strong showing against Grant Union on Friday after getting swept by the Prospectors 3-0 in nine innings and 12-5 in a home doubleheader on April 20.

Said Jackson: “We were a little angry about it. We really wanted to come back and win this.”

Lakeview coach Sam Tacchini credited his players for their approach at the plate against Grant Union sophomore pitcher Drew Williams, who threw a one-hit shutout against them in the first game of the April 20 doubleheader.

“We put more balls in play,” the coach said. “We’ve been preaching that. More contact, even if it’s not the base hit you want, it’s going to potentially lead to some pressure and some chaos.”

Grant Union took a 1-0 lead in the bottom of the first inning on a two-out single to right field by senior Riley Robertson.

But Lakeview capitalized on two errors to pull ahead 2-1 in the third inning. Tacchini delivered the first run with a sacrifice fly. The second run scored when Robertson, the catcher, threw wildly to third base on a pick-off attempt.

Lakeview made it 3-1 in the fifth when Tacchini reached on an infield error and Jackson ripped an RBI double to the fence in left-center.

Grant Union’s Robertson had an RBI single to make it 3-2 in the sixth inning, but the Prospectors’ momentum stalled when Shullanberger cut down the runner at the plate on Parsons’ big hit.

The Honkers added two runs in the seventh on a sacrifice fly by Jackson and an RBI bunt single by McLain. Grant Union got an RBI groundout by freshman Addy Northway in the seventh before McNeley closed it out.

It was a difficult end for Grant Union, which reached the final of the 2A Showcase last year before falling to Kennedy 16-0.

“I think we just made the game bigger than it was,” Robertson said. “We just were thinking about that dogpile at the end instead of making an out, hitting a pitch, just doing the little things right.

“We’re an amazing team. I still think we’re the best team in the state. I would go with these girls against any team. Today we didn’t have it.”

Lakeview, which has one senior on its roster in catcher Emily Philibert, should be a power again next year. But the Honkers will take a step up in competition by moving to 3A.