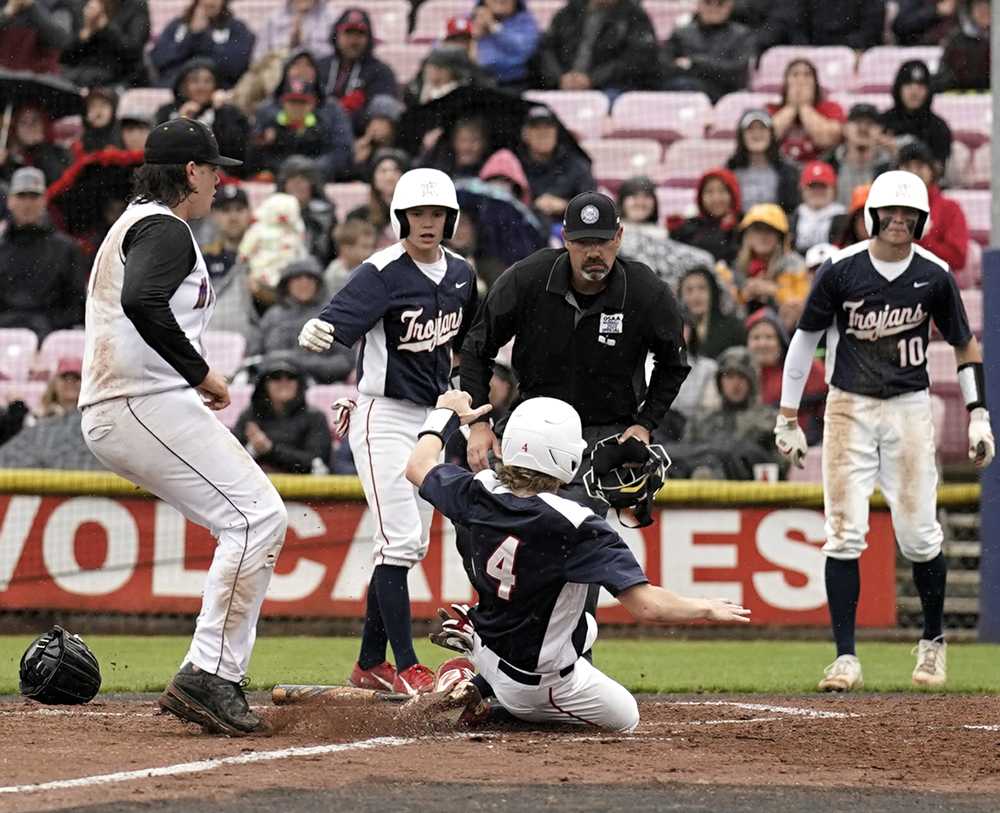 Andrew Cuff uses his legs to score for Kennedy. Cuff also used his arm and bat to propel the Trojans to 2A glory (Jon Olson)

Kennedy had given up just 40 runs through 29 games entering Friday’s evening’s 2A/1A baseball final at Volcanoes Stadium in Keizer. So, when the Trojans plated three runs in the top of the first, that lead must have seemed insurmountable to a young Umpqua Valley Christian team that had been shut out by Kennedy when the teams played earlier in the year.

As it turns out, it was.

Playing error-free baseball in a constant drizzle that made conditions difficult, Kennedy took advantage of five UVC errors and produced 11 hits of its own to win its first title in 10 years, 11-1, in the six-inning contest at the OSAA / OnPoint Community Credit Union Baseball State Championships.

The title avenged a 10-5 loss in nine innings to the same Umpqua Valley Christian team in 2019, the last time an official OSAA championships was held.

“It’s big,” Kennedy coach Kevin Moffatt said about the win. “We lost to these guys in extras the last time we played. We felt like we had the best team in the state the last three years but didn’t get to play for a state title because of Covid. For the guys who’ve come through the program, I think it’s a big win for everybody involved.”

Kennedy (27-3) took advantage of two huge errors to score three runs on just one hit in the top of the first inning. Luke Beyer led off the game with a pop fly to first that got caught in the wind, vexing first baseman Josh Luther. A couple of pitches later, Ethan Kleinschmit hit a foul pop down the left field line that LF Levi Heard got a glove on after a long run but could not corral. Kleinschmidt later singled through the right side, driving in Beyer, who’d stolen second. Riley Cantu then walked on a 3-2 pitch, putting two on for starting pitcher Andrew Cuff, whose sacrifice fly scored Kleinschmit with the inning’s second run. Matt Hopkins plated the third run with a ground ball to short, which turned into an error when Luther couldn’t hang on to the ball at first. UVC starting pitcher Kevin Shaver got out of the inning without further damage by getting a grounder to third and a liner to first.

Kennedy got three more runs in the top of the third to open up a 6-0 lead. With one out, Cantu reached on an error and stole his second base of the game. Cuff was hit by pitch, putting two runners on for Hopkins, who singled through the hole to drive in Cantu. Cuff also scored on the play, and Hopkins advanced to third, when the UVC left fielder’s throw was off target and got all the way to the backstop. Charlie Beyer followed by bouncing a ground ball over the third baseman’s head to drive in run No. 6.

“We played really tight,” said UVC head coach Dave York. “We’re super young. I told them before the game that this game was going to come down to emotion and how they handled theirs and how they handled the moment. We just didn’t handle it well. We made really uncharacteristic plays and did mental things that we hadn’t done all year. It’s hard to win when you do that.”

While Kennedy didn’t knock the cover off the ball, the Trojans did all of the little things – getting bunts down, scoring runs with sacrifice flies, stealing bases and taking the extra base – that put tremendous pressure on a defense. UVC did not handle those well.

“Our offense was outstanding!” Cuff exclaimed. “We put a couple of bunts down; we had sac flies. Any way you could get RBIs, that’s what we did.”

“Credit to Kevin and his crew,” York said. “They do the small things well and we were hesitant. We tell them, ‘Don’t be passive.’ We were passive today and it cost us.”

UVC scored its lone run in the bottom of the third. Sophomore Will Haynes led off with a double to deep right. Nathan York, who singled his first time up, was hit by pitch to put two on with no out. Kevin Shaver, who started on the mound for the Monarchs, walked on a 3-2 pitch to load the bases.

A well-timed hit and Umpqua Valley Christian would be right back in the game!

Instead of UVC getting its big break, however, Kennedy did what championship teams do. Monarch freshman sensation Ty Hellenthal hit a fly ball deep to center, too deep to prevent the runner on third from scoring. So, instead, Kennedy CF Ethan Kleinschmit threw to third and cut down York trying to take an extra base. Luther then popped out, ending the inning with just one across.

One inning later, Kennedy got another heads up play from an outfielder. A hit batsmen and walk put two on with no out for UVC, as the constant drizzle and worsening mound conditions made it a challenge to throw strikes consistently. Cuff, who went five innings and struck out six, got a fly out for out No. 1. A grounder to third produced a force at the bag, but when the third baseman threw short and the ball skipped past the first baseman, Tygue Barron, who had walked, tried to go first to third and was cut down by RF Owen Bruner, who was backing up first and made a perfect throw.

“We played clean defensively, we put a little pressure on them bunting and things like that, we made those two big plays on outs at third,” Moffatt said. “I think they were a little nervous, where we talked about it that it was just another game. ‘Let’s get out there and play.’ And it looked like we were ready from the get go. Even when we got out we were putting the ball in play. I don’t know if we struck out, which would be a first for us.”

Despite the five errors, there were bright spots in the field for Umpqua Valley Christian. In the second inning, the defense that failed the Monarchs in the first and third frames showed up big time, when RF Tyler Haynes laid out to rob Bruner of a hit. Shaver then picked off Brett Boen, who’d opened the inning by walking on four pitches. Finally, York made a nice sliding catch in center to deny Luke Breyer, York’s second nice play in the field in as many innings.

Kennedy’s 6-1 lead grew by one in the fourth inning, when a UVC error, bunt single and hit batsmen loaded the bases with no out for Cuff, who delivered his second sacrifice fly of the game. The Trojans tacked on four more runs in the top of the sixth, highlighted by Boen’s two-out, two-RBI single, which made it 10-1 Trojans. That chased Barron, who had relieved Shaver; and brought on Daniel Withers, whose balk plated Charlie Beyer and extended Kennedy’s lead to 10, putting UVC at risk of the invocation of the 10-run rule.

Kennedy brought on Kleinschmit, he of the 0.12 ERA, to start the sixth. The junior lefty sandwiched a strikeout around two fly outs to clinch the state-championship victory for the Trojans. It was as easy as 1-2-3.

Kleinschmit and Charlie Beyer led the Kennedy attack with two hits each. Hopkins and Boen combined for five RBIs. Cuff, the winning pitcher, drove in two and scored two without an official at bat. And Cantu had two of the team’s seven steals and three runs scored.

For Cantu, a star on the gridiron and hard court for the Trojans as well as the diamond, the win was extra special. His sisters combined for seven state titles during their careers and Cantu, before today, only had a football crown his freshman year to crow about.