3A softball final: Burns caps title with 30th win in row
Tweet
Behind sophomore pitcher Ayla Davies, the No. 3 Hilanders dispatch No. 1 Yamhill-Carlton 3-1 for their first state championship
June 3, 2022 by Jerry Ulmer, OSAAtoday 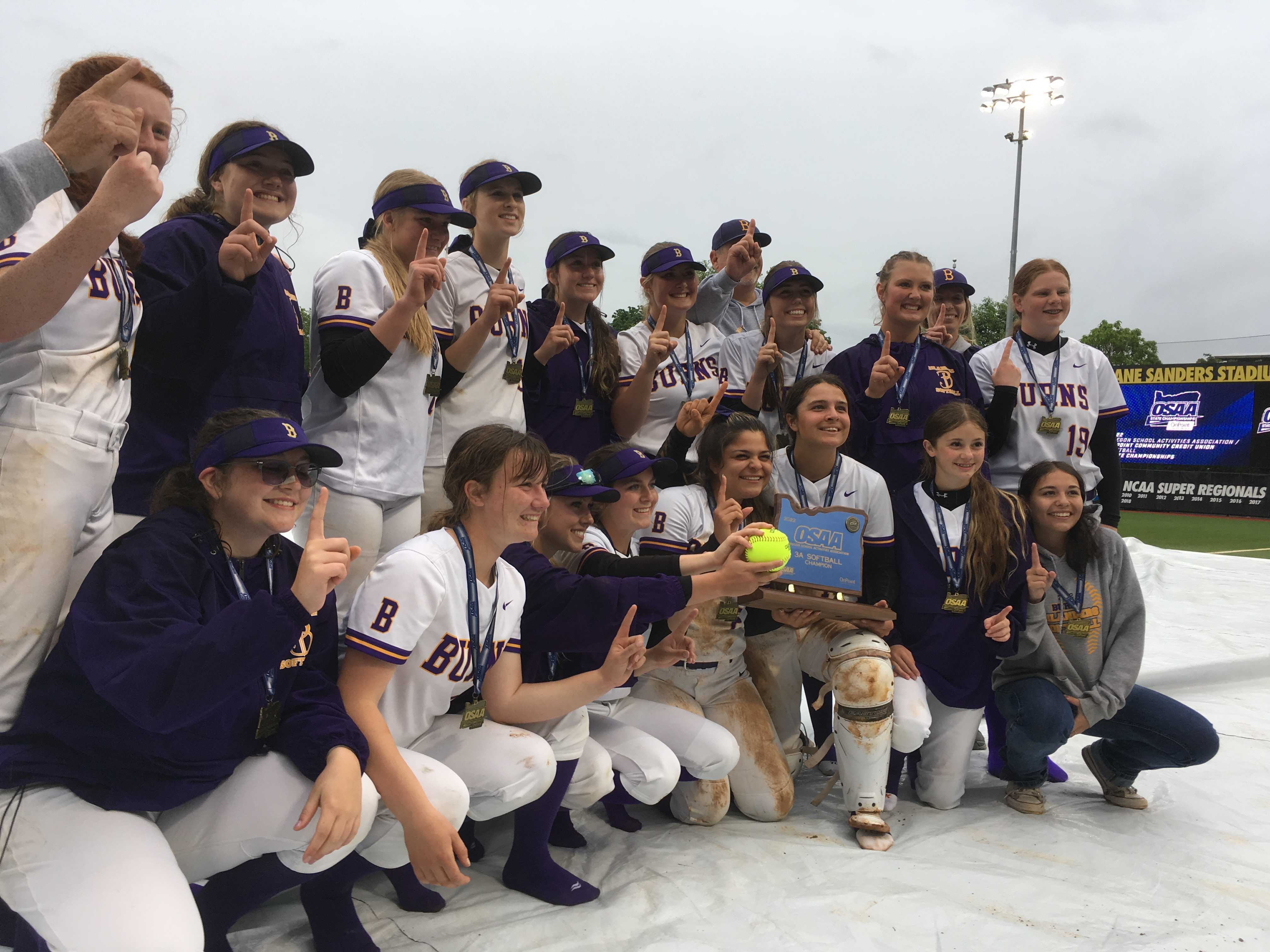 Burns knocked off previously unbeaten South Umpqua and No. 1 Yamhill-Carlton in its final two games.

EUGENE – Just four years removed from going 0-20, the Burns softball team stood at the top of the mountain Friday night.

The third-seeded Hilanders put the final touch on their first state championship by defeating No. 1 Yamhill-Carlton 3-1 in the OSAA/OnPoint Community Credit Union 3A final at the University of Oregon.

The Hilanders had never won a playoff game before this season but came together under first-year coach Robert Medley, the school’s principal, who coached Scappoose to 4A baseball titles in 2010 and 2015.

Davies credited Medley and the team’s assistant coaches – Lindsay Davies, her mother, and Ty Temple – with helping the Hilanders reach a new level after finishing third in the season-ending 3A tournament last year.

“I have never played for better coaches,” Davies said. “Robert Medley, especially. He’s got a lot of experience coaching, and he did fantastic. Our practices were so well structured. And my mother calls my pitches.”

Davies had an outstanding season, striking out 342 in 139 2/3 innings. In four playoff games, she gave up nine hits and two runs.

Davies helped get the Hilanders started on offense Friday when she drew a first-inning walk and came around to score on a wild pitch. It helped soothe her nerves in the circle.

“As a pitcher, that saves me so many heart attacks,” she said.

Burns added two more runs in the fifth inning. Sophomore Mackenzie King singled and scored on a double by junior Mattie Woodbury. Davies followed with a single to score Woodbury to make it 3-0.

Woodbury, the No. 9 hitter in the lineup, followed up her big game in the semifinals, when she hit two home runs in a 7-1 road win over second-seeded and previously unbeaten South Umpqua.

“It really feels good,” Woodbury said. “I knew I could hit well, it’s just at the beginning of the season I wasn’t putting a whole lot of effort in, and I wasn’t swinging properly.”

Yamhill-Carlton (26-4) threatened in the fifth inning when a single by sophomore Bryason Conway and a double by junior Lexiss Antle put runners on second and third with one out, but Davies struck out sophomore Maddy Tuning and junior Briley Ingram to end the threat.

The Tigers put runners on second and third with no outs in the sixth but Davies escaped again, yielding only an RBI groundout by freshman Cecelia Petraitis that cut the lead to 3-1.

“The pitcher from Burns was pretty dang good,” Yamhill-Carlton coach John Kuehnel said. “She threw the ball hard, and we couldn’t seem to lay off the high stuff. … This is the first time our bats have been that cold all year.”

Hilanders junior catcher Merissa Medley, the coach’s daughter, said the chemistry between her and Davies is key.

“I love catching for Ayla,” she said. “I work with her great. We have this joke that we’re like an old, married couple because we argue a lot, but at the same time, we get along so well. I know what to expect from her, and it’s super fun.”

Davies retired the Tigers in the seventh inning to set off the celebration for Burns, which also won the 3A volleyball title last fall and was the state runner-up in girls basketball.

For Robert Medley, the title was especially gratifying.

“It’s great to be able to celebrate it with your daughter,” he said. “That feels good. Those baseball state championships were special groups of kids, too. Every one of them is different and special in their own way.”

Merissa Medley, who hit .539 with five home runs and 46 RBIs this season, said “it means everything” to win a title with her father.

“I never had him much as a coach myself,” she said. “He coached me off to the side a lot, but having him as my head coach means everything to me. It’s probably one of the most exciting things about the season. I think he brought a lot more discipline to the team.”

Senior Kati Slater took the loss for Yamhill-Carlton, which played in its first state final. She allowed six hits, struck out 10 and walked four.

Kuehnel, who has won 420 games with the Tigers since taking over as their coach in 1997, relished the opportunity to compete on the big stage for the first time in his highly successful run.

“It’s been an awesome season,” he said. “You can’t go 26-4 and it not be awesome. Nobody likes to lose their last game of the season, but guess what, there’s only one team that doesn’t.”