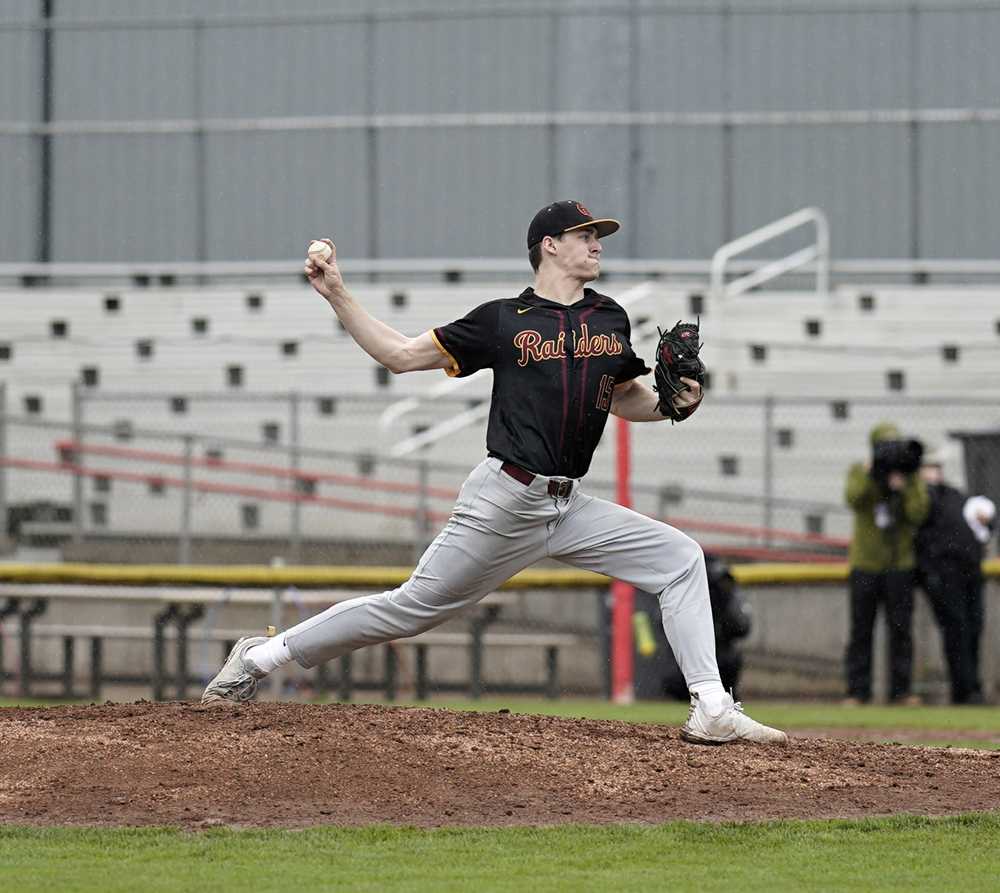 At the end of April, Crescent Valley faced Mid-Willamette Conference rival Lebanon in a two-game series. Lebanon won handily, 11-4 and 8-4.

Crescent Valley wasn’t really in either game. The Raiders gave up five in the first inning in the first game and got down 4-0 early in the second game.

On Saturday morning, at a soggy Volcanoes Stadium in Keizer, Crescent Valley won the one that mattered most.

The Corvallis school dominated in every phase, shutting out Lebanon on three hits, 6-0, to win their first state 5A title at the OSAA / OnPoint Community Credit Union Baseball State Championships.

Noah Dewey, one of eight seniors, was the star of stars for Crescent Valley. The 6-6 right hander pitched into the seventh inning, allowing just two hits while striking out nine. He owned the outer half of the plate with a fastball he kept down and away in the zone and a tight-spinning slider. Dewey also contributed a double and RBI single his first two times at the plate.

“This has been the dream since Day 1 of the season,” Dewey said. “We’ve been wanting this championship for a while.”

“We had beaten Noah earlier in the year but he was a different guy today,” said Lebanon coach Jeff Stolsig. “He had his slider working. Hats off to Noah. He threw really well.”

In April, when Lebanon ran through Crescent Valley, the idea of even making the playoffs appeared remote. The Raiders were 10-9 and on a four-game losing streak when they started a two-game series with tough Silverton.

“Before Silverton, I told the guys, ‘We have to start winning ballgames to make the playoffs,’” said fourth-year head coach Scot McDonald. “We went 10-1 after that point. They banded together.”

“We knew that we needed to focus if we wanted to make the playoffs,” added senior 1B Garrett Bozdeck. “We have such a huge senior team; we were thinking, ‘This is our last shot. Let’s make a run for it.’ We played well against Silverton and thought, ‘If we can beat that team by a lot we can beat any team.’”

The start of Saturday’s game was pushed back 30 minutes to allow the early-morning work on the field by the grounds crew to take effect in cloudy and cool conditions. When the game started, it was accompanied by a steady drizzle that lingered throughout, occasionally turning into a harder rain.

Ryan Rivers, a hard-throwing junior with a 0.46 ERA coming in, started the game for Lebanon and seemed unfazed by the conditions. The righty showed command in a scoreless first inning, working around Dewey’s two-out double by getting cleanup hitter Luey Campos to strike out looking on four pitches, Rivers’ second backwards K of the frame.

Dewey matched Rivers’ goose egg in the bottom of the first. With one away, he gave up a hot shot to Bryant Starr that SS TJ Deen snagged going to his right, but Deen’s throw was wide of first and bounded out of play, putting Starr in scoring position on second. Deen made up for the miscue by successfully fielding the next two ground balls to get the Raiders out of the inning unscathed.

Crescent Valley (20-10) struck first in the top of the second, thanks to shoddy Lebanon defense. Caleb Kelley coaxed a walk out of Rivers on a 3-2 count to lead off the inning. Kelley then stole second with one out, which proved crucial, because Kelley was able to score when Zach Escobar’s slow roller to second got under the glove of Zach Lyon. Rivers got out of the inning without further damage, with a ground out and his fourth strike out of the game.

Crescent Valley added to its lead with two runs in the top of the third. Landen Parker drew a leadoff walk to start the frame and got to second on a steal aided by a crafty slide around the tag. Parker scored when Dewey fought off a two-strike breaking ball into right field for an RBI single. Garrett Bozdeck plated CV’s third run with a two-out single down the third base line.

Dewey, meanwhile, was cruising along. He set down eight in a row after Starr reached, allowing Crescent Valley to go to the fourth inning in command, up 3-0.

In Lebanon’s dugout, Stolsig was wondering when Lebanon was going to surge. He was confident it would happen at some point. It had happened all season long.

“We’ve been behind early in games and we’ve been behind late and we always seemed to rally,” he explained. “They did a good job of keeping us down. We didn’t get the breaks we needed to. We didn’t have that moment today when we broke loose.”

Lebanon (23-5) had a great shot to score in the bottom of the fourth, when Dewey hit both Starr and Rivers with off speed pitches to put two on with no out. The bulldog righty fanned the next two batters and faced Lebanon catcher Matt Woodward looking to get out of the inning. Woodward hit a 1-2 pitch hard towards short. The ball seemed ticketed for left to drive in two, but it hit his teammate, pinch runner Caleb Rickman, trying to advance to third. Rickman was ruled out for interference and, by rule, Woodward was credited with a single, Lebanon’s first hit of the game.

One inning later, Lebanon benefited from a throwing error and walk to put two on with one out against Dewey, but the hurler struck out Warrior leadoff hitter Colton Vandetta for the third straight time and induced Starr to pop out to right to escape the threat.

In the sixth, Rivers led off with a hard single to left. The promising start, however, fizzled when Tucker Cleveland made a nice scoop at the second base bag to force Rivers. Lebanon’s next two hitters went down as well, ensuring that Crescent Valley would carry at least a three-run lead to the bottom of the seventh.

Crescent Valley would double that by the time Lebanon got to bat one final time. Double was the operative word of the inning, because the Raiders ripped three in the top of the seventh to produce three runs.

Walker Still got things started by greeting Starr, who had relieved Rivers; with a long double to center on the first pitch he saw. One out later, Campos doubled down the left field line to plate one insurance run. Campos then stole third and Caleb Kelley walked for the second time in the game, putting Raiders on the corners.

That brought Tyler Walker in to pitch to Bozdeck.

“I went up there thinking this is probably my last at bat as a senior,” he explained. “I’m going to go up there and swing for the fence. I got a first pitch fastball. That’s what I was sitting. I just turned and burned.”

The scalded ball hit the base of the wall in left, driving in two more.

The 6-0 score appeared insurmountable, especially since Lebanon had generated just two singles to that point.

Dewey came out for the seventh and struck out a pinch hitter looking, but departed after giving up a one-out walk to CF Henry Pointer. McDonald gave his ace a huge hug before handing the ball to Parker to close it out.

“My attitude was I’m going to strike out every player who comes to bat,” Dewey said. “I wasn’t worried about giving up hits. All was thinking is, ‘I’m going to get you out.’”

Parker struck out the first batter he faced, but Vandetta stroked a single to center, delaying the celebration by one batter. Starr then grounded into a force play, Dewey at short to Cleveland at second.

The dogpile at the mound was epic.

“As eighth graders we came and the 2018 team was here and we watched them lose,” Bozdeck said. “We thought, ‘That’s going to be us in four years.’ I think it was that determination to come back, give it another shot, come out, compete… look what happened.”

“The win means everything,” Dewey added. “All these guys we’ve been playing with since middle school…it’s the best feeling in the world to win the last game of the season.”

Lebanon, which entered the game on a 10-game winning streak and was seeking its initial state title in its first trip to the championship game, finished with just three hits in 25 plate appearances. Most games, that’s not nearly enough against an opponent playing clean baseball.

“We intended to win,” Stolsig said. “Our guys are competitors. They are not happy with the result. The best team doesn’t always win; it’s the team that plays the best that day. They played better than we did today.”

Even so, it was a season of firsts for the Warriors, who had never even reached the state semifinals before this season.

“I’m super proud of these guys,” Stolsig said. “They did a great job of competing all year long. What I love most is they’re not going out of here satisfied. They expect more of themselves and will come back strong.”

The box score shows Bozdeck, Dewey and Campos with two hits apiece for Crescent Valley and all five RBIs. This was, however, a total team effort. Everybody in the lineup got on base at least once, except for the middle infield, and they both came up big defensively. That’s how you win championships, especially when you have horses on the mound like Dewey and Parker.

“All during the playoffs, Landon and Noah got after it,” McDonald explained. “Our big thing was: throw strikes, no free bases and we’ll play defense behind you. They did it.”