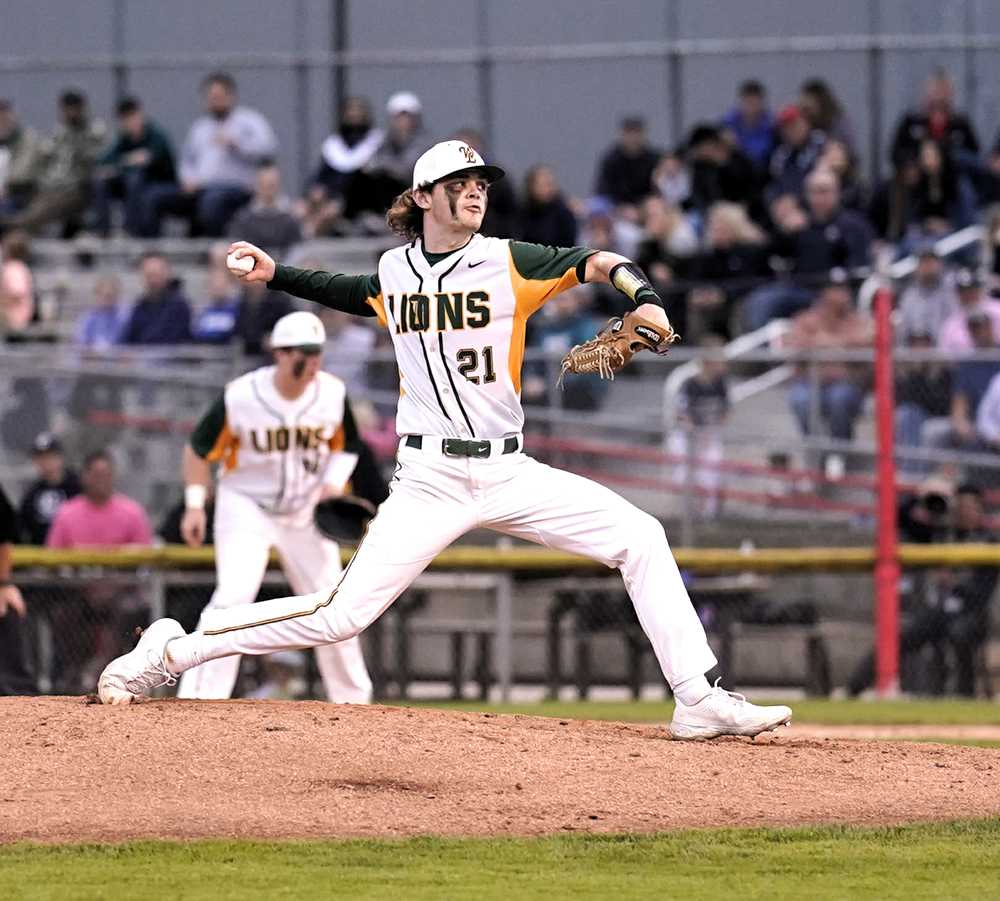 West Linn scored five in the first, three in the third and sixth in the fourth, and rode the arm of Drew Talavs to its first 6A baseball state title since 1982, in a 14-0, five-inning blanking of upstart Canby Tuesday night at the OSAA / OnPoint Community Credit Union Baseball State Championships played at Volcanoes Stadium in Keizer.

The Lions, who lost in close 6A championship games in 2015 and 2017, took advantage of Canby’s first-inning nerves to score five-unearned runs, then used two-out magic in the third to extend their lead. They piled on in the fourth, scoring six more unearned runs, capped by pinch-hitter Henry Popma’s bases-clearing double. The Lions became the first 6A team in Oregon history to win the state championship in five innings.

“This was our goal the whole year,” Talavs said. “We’ve been super locked in since the playoffs started. A switch just flipped. We just hit the ball hard and played great defense.”

“We had this expectation coming here that we would do whatever it takes to win and that’s what we did,” added first baseman Jake Holmes. “It’s been 40 years.”

“The journey started last summer when we came together as a family,” said head coach Joe Monahan. “We’ve just been rolling. We play for June and expect to win league and state championships every year.”

Talavs, who was questionable for the playoffs with discomfort in this throwing shoulder, was magical for West Linn (25-7). The junior right hander, an Oregon State commit, struck out 10 and gave up two hits and no walks to earn the win in his third playoff start. He pounded the strike zone and commanded both his plus fastball and late-breaking slider.

“I was super comfortable on the mound,” he said. “I just knew I had to throw strikes and get quick outs.”

Talavs finished 3-0 in the playoffs, with just two runs allowed over 15 innings. He went five innings versus Lakeridge in a 5-4 semifinal win last Tuesday and was adamant that he would start the championship game as well.

Junior Max Wright was the hitting star for West Linn. The third basemen went 2-for-2 with three runs scored and three driven in. Popma also drove in three, while Holmes and Barret Brundage each plated two runs with timely hits.

Backed by a large, boisterous crowd, Canby had a lot of energy in pre-game warm ups. Coach J.J. Stolsig said that his team was well-prepared to take on the Lions.

Once the game started, however, it was all West Linn.

Talavs set the tone in the top of the first. He needed just eight pitches to set Canby down in order, including two strike outs.

West Linn then proceeded to bat around in the bottom of the first. The Lions had three hits, including Wright’s two-run double; but a lot of the damage was self-inflicted. Joe Brauckmiller, Canby’s best pitcher and hitter, plunked leadoff batter Drake Gabel with a 2-2 breaking ball. He then threw high to second base on Jeremy Levasseur’s sacrifice attempt. After Ryan VandenBrink beat out an infield single to short, Brauckmiller got Kace Naone, West Linn’s hottest hitter, to tap into a force at home.

That brought up Spencer Sullivan, the hero of West Linn’s semifinal win over Lakeridge. Sullivan, swinging from the left side, hit a hard grounder to short that would have been a tailor-made double play ball had 2B Theo Netter not been shading Sullivan in the hole. Netter could not get to the base in time to receive SS Kellan Oakes’ throw and the ball skipped into right as two Lions scored. Wright followed with his double and Ryan Holmes produced an RBI ground out to give West Linn its robust 5-0 lead after one.

West Linn continued its onslaught with a two-out rally in the third that produced three more runs. It started with Wright being hit on the hand and moving to second on a wild pitch. He scored on Holmes’ single to center. After DH Gabe Howard walked, Brundage hit a 2-2 fastball deep over the right fielder’s head for a two-run triple, making it 8-0 Lions after three.

Holmes said that getting the sixth run was crucial. West Linn had built a 5-0 lead in its semifinal over Lakeridge only to see the game come down to one run at the end.

“That’s what I was thinking in the box,” the junior said. “Anything can happen in baseball. I knew we had to keep scoring. Two strikes, I just changed my approach and hit one up the middle.”

Canby threatened in the fourth with singles from Bryce Oliver and Oakes – Canby’s only two hits of the game -- but Talavs notched his seventh strikeout to strand runners at second and third.

West Linn added six runs in the bottom of the fourth – all unearned – to makes its lead insurmountable. The scoring started with a two-out dropped fly ball in left field, which scored Levasseur, who had singled. Wright followed with an RBI single to make it 10-0. Three batters later, Popma, pinch-hitting for Brundage, laced a double down the left field line to score three more. Pinch hitter Jackson Curdy closed out the scoring with an RBI double deep to left-center.

Talavs then struck out the side in the bottom of the fifth to end the game and let the West Linn celebration begin.

“We’ve had a lot of great teams and great players come through here,” Monahan said. “We wanted to play for all the alumni, who worked so hard to get this program where it is.”

Canby finished its season 19-13. The Cougars, who had not had a winning record in at least 10 years prior to this year, made a magical run to the championship game, but could not overcome their slow start.

“You’ve got to tip your hat to West Linn,” Stolsig said. “Drew threw the heck out of the ball. They hit the ball pretty well. We didn’t play our best game and we needed to. That happens but credit goes to them. They played really well.”

Despite the loss, this Canby team, especially its 11 seniors, left a mark on the program. Stolsig got emotional trying to describe what they meant to Canby baseball.

“These guys really care about each other,” he said. “That’s what allowed us to go on this run. They changed the trajectory of the program from their freshman year to now. We had a lot of really good moments with these guys.”