Volleyball: Silverton setter Haury, top recruit, chooses UW
Tweet
Alexis Haury, heading into her junior year with the Foxes, is rated as the No. 1 setter in the nation for her class
July 19, 2022 by Jerry Ulmer, OSAAtoday 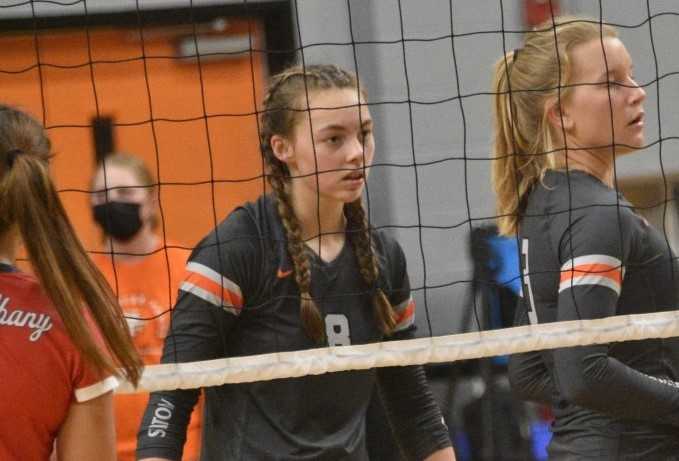 Silverton's Alexis Haury (8) was the state's Gatorade Player of the Year as a sophomore last season. (Photo by Jeremy McDonald)

Despite receiving about 60 volleyball scholarship offers, as it turned out, Alexis Haury's heart was set on one place.

The 5-foot-10 setter and outside hitter, who is going into her junior year at Silverton, had made a connection with University of Washington coaches since she started attending their camps when she was 11 years old.

So last week, during the first day of a four-day camp at Washington, Haury decided to make it official. During a lunch break, she chased down Washington coach Keegan Cook and showed him a picture of her dog dressed in a Huskies jersey with the message, “I want to be a Husky, too.”

“I knew going in that I was going to commit,” Haury said. “I just wanted to do it in person.”

The commitment ended the hot pursuit of Haury, named the state's Gatorade Player of the Year as a sophomore.. For her class, she is rated as the No. 3 player in the nation and the No. 1 setter by PrepVolleyball.com.

“It was very stressful, but relieving,” Haury said of completing the recruiting process. “Trying to find out where I was going to be for college, it just takes the pressure off. I'm going to be super excited to go out and play with U-Dub and all those players.

“I never had a plan to commit by this time or to this school. I tried to keep an open mind about it all.”

Adam Ellis, Haury's club coach with North Pacific Juniors, said she belongs in elite company in state history. He said that at this point in her career, she is in the same category as 6-4 Kim Hill, the former Portland Christian star who became Oregon's first Olympian, and Izzi Szulczewski, the ex-Mountainside and current Oregon State setter.

“I think Alexis is on that path,” Ellis said. “Her ability to make the people around her better is really what sets her apart. She will be one of the top setters that ever comes out of Oregon.”

Haury showed what she can do last season in helping Silverton reach the 5A quarterfinals. She had 398 assists, 224 digs and 201 kills to go with a .457 kill percentage.

But Haury was no secret as she ascended in youth volleyball circles. She began playing at age 8, influenced by her parents, Warren and Jody, who met while playing in an adult volleyball league. And by the time she participated in an NPJ camp as a fifth-grader, she was showing tremendous promise.

At NPJ, Haury has played up as many as three age levels, taking over as the starting setter on the club's nationally ranked 18s team as a freshman. She took lessons from former Santiam Christian and Oregon State setter Tayla Woods in her early days and has developed under club coaches Ellis, Mike Gee and Courtney Shaffer.

Haury has trained with Gee – one of the top five trainers in the country, according to Ellis – twice a week for five years. Ellis said that her work ethic, athleticism and “super high volleyball IQ” makes her special.

“It's like a perfect storm,” Ellis said. “She has a goal, she has a dream. Her goal is to win national championships and play in the Olympics and play professionally overseas. Mike's really been working with her and training her toward that goal.”

Haury began to get college attention when she started going to camps two years ago. It wasn't long before the was nationally rated.

“It was pretty exciting,” Haury said. “I try not to put a whole lot of stock in those things because they change a lot. I was just trying to keep going and get better.”

The college offers started pouring in.

“The first couple days it was pretty overwhelming, trying to set up phone calls,” Haury said. “I basically printed out some papers of questions that I would ask each coach when I called them. I was kind of weeding out what I wanted from a college. I just tried to keep an open mind going into it all.”

Ellis lauded Haury's commitment to Washington, which has made the NCAA Elite Eight four times in the last six seasons. She will be the third NPJ player to compete for the Huskies.

“The coaching staff and the program at Washington is pretty hard to beat,” Ellis said. “Keegan does an amazing job.”

Before heading off to college, though, Haury has two more seasons to leave her mark at Silverton. The Foxes are hungry after last season ended with a quarterfinal loss to Mid-Willamette Conference rival Crescent Valley.

“I was disappointed that we lost, but I'm really excited to see where this year's going to take us,” Haury said. “This year we're going to be a team of a lot of seniors. Last year we were a lot of juniors.”