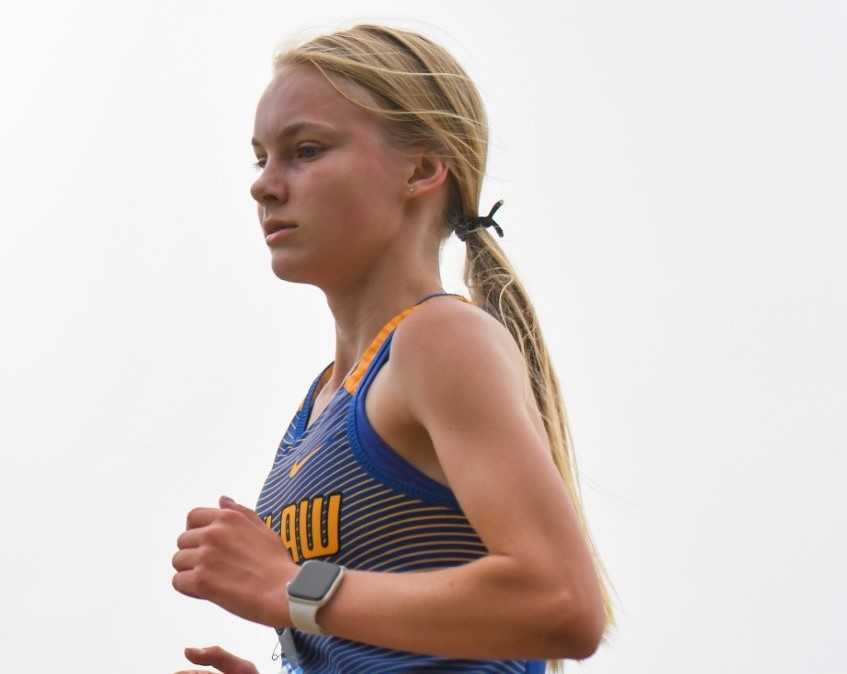 Junior Corduroy Holbrook, 18th in the 4A meet last year, has helped set the pace for Siuslaw. (Photo by Becky Holbrook)

In winning the last two 4A boys and girls cross country titles, Siuslaw had a good fix on the statewide landscape.

In dropping down one classification this year, though, the Vikings have ventured into unknown territory as they now must contend with perennial small-school powers such as Enterprise/Joseph/Wallowa, Union/Cove, Bandon and Burns.

Siuslaw coach Chris Johnson confessed to some “trepidation” against the new competition.

“I always felt like I knew what was going to happen,” Johnson said. “But being up against all these different programs, it's just an unsettling feeling. And that's how I think the kids are feeling, too.

“I feel like we're deep on both sides, and we have some low sticks. But it's a little bit different feeling going into a meet with people I've never had to compete against, for the most part, on the biggest stage.”

Siuslaw graduated its top boy and girl from last season – Chad Hughes and Rylee Colton – but retained much of its depth. Both Viking teams were ranked No. 1 in their respective OSAAtoday coaches polls at midseason and are ramping up to go after three-peats in the OSAA championships Nov. 5 at Lane Community College.

The boys team is undefeated in 3A, narrowly finishing ahead of No. 2 Valley Catholic at the Rose City Championship Invitational on Oct. 14 and edging No. 3 Oregon Episcopal at the Champs Invite on Sept. 23. The girls team has lost only once in 3A/2A/1A, finishing two points behind No. 2 Bandon in the Fugate Farms Invite on Sept. 13.

Considering their championship DNA, the Vikings are going to be difficult to turn back with the big prizes at stake. They will run on the state course Thursday in the 3A/2A/1A Special District 4 meet at Lane.

“The kids have been through it before,” Johnson said. “Our fast times haven't come yet. If you ask the kids, they know that we're going to be primed and ready. We did a workout Saturday and it was almost like I had to slow them down. They were just on all cylinders.

“Based on what we've done workout-wise, I feel like this is as good as we've been in the last three years, on both sides. I'm confident in that regard.”

Ulrich has the No. 6 time in 3A; Hughes and Blankenship are 11th and 12th, respectively.

The Vikings also added freshman Alison Hughes, the sister of Chad and Kyle. She and Holbrook have paced the team this season, ranking 20th and 24th in 3A/2A/1A, respectively.

“They feed off each other,” Johnson said.

Holbrook made big strides as a sophomore and carried the momentum into this season.

“This year she's just a different kid,” Johnson said. “She's focused and confident. She's been the straw that's been stirring the drink.”

The girls don't have an individual state contender, however, unlike other top teams such as Valley Catholic, Oregon Episcopal and Bandon.

“Our bread will be buttered with our depth, which has always kind of been our hallmark,” Johnson said.

Given the state realignment, however, it's difficult to make any predictions.

“With six kids back on both sides, and some good freshmen, not that I thought it would be easy, but I felt confident that we'd be super strong,” Johnson said. “It just seems like there's a slew of people to compete against.”