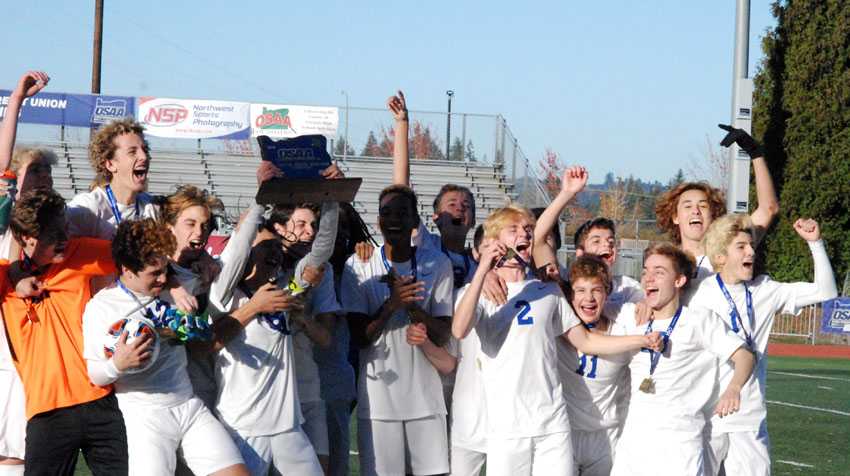 Jed Whalen Stewart ran onto a cross from Spud Ward early in the second half and drilled the ball into the net as second-seeded Catlin Gabel (14-1-4) overcame top-seeded Oregon Episcopal School (15-2-1) for the OSAA boys 3A/2A/1A title on a sun-splashed Saturday afternoon at Liberty HS in Hillsboro.

The district rivals, located two miles apart in Portland, had played twice during the regular season, with OES winning a close game, 1-0, and the teams battling to a 1-1 draw in the other. But on Saturday, it was Catlin Gabel that had the better of the play from about the eighth minute on.

“We were calm,” said Catlin Gabel coach Peter Shulman. “We felt confident and calm. Coming into a championship game there’s a lot of energy. We said we’re going to win balls. We settled in and started to dominate the game.”

“I knew OES was going to fight us to the end but we settled down and limited their chances,” said Eagle captain Hansen Lian, one of only three seniors on the team. “For the most part we kept the ball in their half. That’s how we ended up winning.”

OES started off the game as the aggressor. The Aardvarks had a golden opportunity one minute after the opening kickoff when James Lawliss sent a free kick from 31 yards away that just missed big Kennedy Balandi’s head. OES kept up the pressure, earning two corner kicks in the first five minutes, but could not capitalize on Derek Seneker’s entries into the box.

The tide started to turn in the eighth minute when Catlin Gabel earned a corner kick. Freshman Felipe Rueda created a dangerous chance with a well-placed cross and the Eagles should have had a 1-0 lead. But goalkeeper Thomas Hochman, the lone senior on Oregon Episcopal’s team, made a beautiful kick save to keep the ball out of the net.

Hochman continued to come up big all half long under relentless pressure. In the 16th minute, Catlin Gabel’s fourth corner of the first 40 minutes found an Eagle head and created a dangerous chance that Hochman tipped over the cross bar. In the 32nd minute, Hochman denied Whalen Stewart on a header.

The half ended with no score but the feeling was palpable that, if this kept up, it was only a matter of time before Catlin Gabel put one in the net. Four minutes into the second half, a set piece nearly put the Eagles in front. Ward took a free kick from 33 yards out and tall freshman defender Josh Hamlett directed it toward the net with a strong header. Once again, Hochman was there. Five minutes later, Hamlett led Kai Gamboa with a beautiful pass into the box. Hochman was there once again to make a sprawling save.

Before the OES defense had a chance to recover from that near miss, Catlin Gabel attacked again. Ward made a strong run down the left side to the corner, where it appeared he was stymied by two defenders. Somehow, he freed up space and directed a cross into the goal mouth. Hochman had no chance to stop this one. Whalen Stewart one-timed it into the goal. Catlin Gabel had the lead it had been seeking the entire match.

“I’m pretty confident with the ball but I got really lucky,” Ward said. “The ball hit off of [the defender] and I ended up with the ball. All I could do was put a cross in. It was a perfect run by Jed.”

“The Spud is a tricky guy on the sideline, a very crafty player,” said Shulman. “I was happy to see the ball going to Jed. He’s a really good finisher around the goal. When he got on the end of that you knew it was going in.”

Catlin Gabel was just beginning to enjoy playing from ahead when OES tried for the equalizer. In a strange sequence, the ball found Balandi, who kicked a slow roller to the right of Eagle keeper Bowen Blair. The sophomore did not react, perhaps thinking that the play had been whistled offside, perhaps thinking the shot was clearly wide. It was neither and hit the far post but did not cross the goal line before being cleared away.

Over the ensuing 15 minutes, the game was played mostly in the midfield, with senior Lian seemingly on every loose ball for Catlin Gabel. The best chances during this stretch, however, came from OES captain Jonah Song, who had a shot blocked in front in the 59th minute and a header in the 64th minute saved by Blair.

In the 67th minute, OES produced its best scoring chance of the match. A blistering, knuckling shot from Song from about 25 yards out required Blair to dive to his right to bat it away from the goal. It appeared that Balandi would get to the rebound first with an open net in front of him, but Hamlett extended a got a piece of the ball, which flew into the air and hit the top of the crossbar before tumbling out of play.

Oregon Episcopal did not threaten again. With Lian, Ward, Gamboa and Evan Karp playing with great energy in the midfield, the last 10 minutes of the match was played essentially in OES’ end. Hochman created one last highlight when he stopped a Karp header in the 74th minute, but Catlin Gabel showed late that the best defense is a good offense and played keep away from OES until the final whistle.

“It was a back and forth battle,” said Rosenberg. “I think both teams were hungry. Catlin showed they were the team with the ability to capitalize on the big moments.”

“It’s a long game on a big field with a lot of players but can be a game of inches,” the OES coach continued. “We were on the wrong side of that inch today but Catlin earned it.”

“They gave a good last push and we had a couple of heroics down the end but I thought we were closer to getting the second goal than they were to getting the first with one incredible exception there,” said Shulman.

The win was sweet redemption for a Catlin Gabel team that last year was looking to repeat its 2016 title only to get clobbered by Riverside in the final.

“That was a bitter pill,” Shulman noted, “but these guys were highly motivated when they came back.”

Especially Lian, who played his heart out.

“Hansen is a captain, a ‘never-say-die’ kid,” Shulman noted. “His attitude was we lost a lot of great players [from last year] but we’re ready; we’re going to do this thing. I don’t think he ever had any doubt.”

“I’m so proud of you guys!” Lian told his teammates afterwards. “You’ll go win it again next year.”

That’s not something Rosenberg was ready to concede.

“Both teams are really young,” he said. “I think this is the first of a number of good battles that we’re going to be having.”