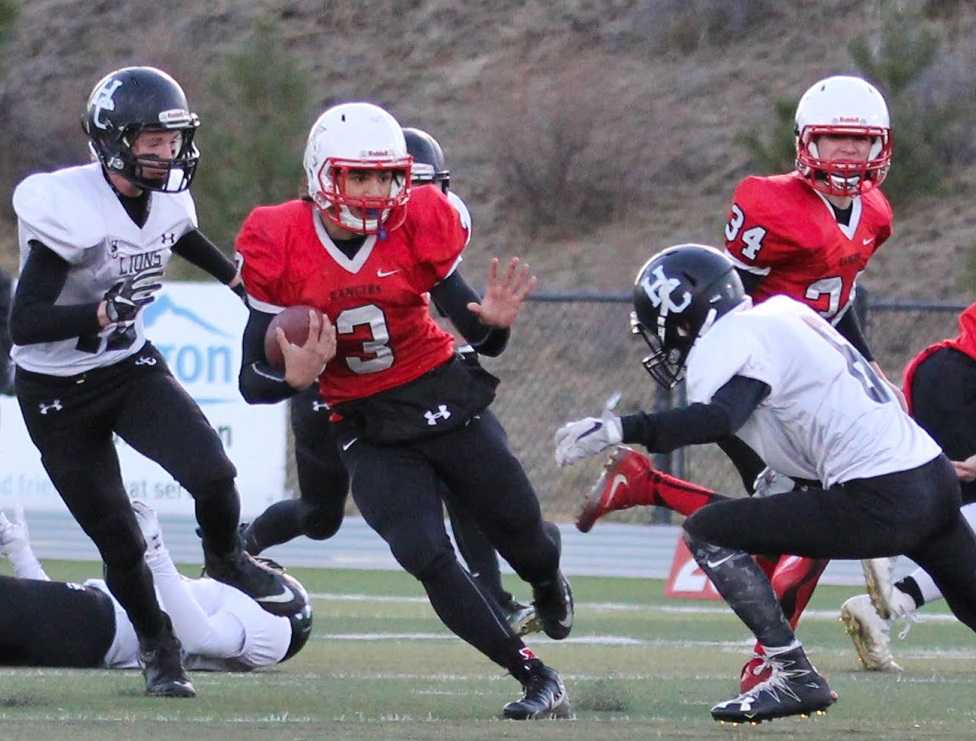 Dufur's Asa Farrell (3) has accounted for 18 touchdowns as a runner and receiver. (Photo by Robert Wallace)

Heading into the season, Dufur looked like an excellent bet to contend for a fourth consecutive 1A football title.

A week into camp, though, Rangers coach Jack Henderson wasn’t so sure.

“I remember I came home and told my wife that if she wanted to make travel plans for Thanksgiving, she might as well go ahead and do that because we weren’t going to be very good,” Henderson said. “We were just terrible.”

But it didn’t take long for Dufur to get its house in order and resume its regular dominance. The Rangers (12-0) rolled undefeated through the regular season and have reached the eight-man state championship game after outscoring their three playoff opponents 172-27.

Top-seeded Dufur will carry a 32-game winning streak into the eight-man final against No. 3 St. Paul (12-0) at 11 a.m. Saturday at Hillsboro Stadium. It will be a classic matchup between programs that have combined to win 15 titles and appear in 23 championship games.

Once the Rangers got pointed in the right direction, Henderson’s biggest wish was that they wouldn’t see St. Paul until the final. It came true.

“I think probably the happiest day this year for me – football-wise, at least – was when the brackets came out and Dufur and St. Paul were on opposite sides,” Henderson said. “There wasn’t a lot of mystery from the beginning about who should be playing at the end.”

“I think the fact that it’s St. Paul and Dufur is a big deal just because of the tradition of those two schools over the years,” St. Paul coach Tony Smith said.

St. Paul returned to 1A this season after spending the last four years playing the 11-man game in 2A. The Buckaroos made it to the 2A semifinals last year

“I think the 1A classification really missed them,” Henderson said. “We’ve had great battles with St. Paul through the years. We really missed having them as a rival, for sure. I’m really looking forward to being on the field with them Saturday.”

Henderson said that this year’s Dufur team -- which has all four members of the 1A champion 4x100-meter relay in seniors Cole Kortje, Abraham Kilby, Anthony Thomas and Tanner Masterson – is his fastest ever.

St. Paul senior Justin Herberger has rushed for 1,422 yards and 22 touchdowns. Junior quarterback TJ Crawford has thrown for 1,336 yards and 25 touchdowns and run for 472 yards and 10 scores. Senior Jaidyn Jackson has 12 touchdown catches.

“We’re pretty much mirror images of each other,” Smith said. “Neither one of us are really big, we both have good speed, we both can throw the football and we both play good defense.”

St. Paul and Dufur are the deepest programs in 1A with 31 and 27 players, respectively.

“It seems like St. Paul and Dufur are two of the school districts and football programs that kind of buck the trend,” Henderson said.

Previews for Saturday’s other finals:

No. 7 Thurston (9-3) vs. No. 1 Wilsonville (12-0), 2:30 p.m., Hillsboro Stadium: Wilsonville quarterback Nathan Overholt, who last week tied Beaverton’s Taylor Barton (1997) for the state single-season record for touchdown passes with 56, leads the Wildcats against the upstart Colts. In a 28-7 semifinal win over West Albany, Overholt threw two touchdown passes and ran for 108 yards and two scores. Senior Jonah Gomez (53 catches, 1,006 yards, 15 touchdowns) leads Wilsonville in receiving. Thurston, the lowest seed ever to make the 5A final, is on a roll. The Colts beat No. 2 Churchill 49-48 on a late field goal and throttled No. 3 Pendleton 51-30 in the semifinals. Thurston junior quarterback Cade Crist has passed for 2,583 yards and 30 touchdowns and junior Wes Kommer has rushed for 1,784 yards and 20 scores. The Colts have appeared in one final, losing to West Albany 35-28 in 2008. Wilsonville, runner-up in 2003 and 2016, won its only title in 2004.

No. 3 Seaside (10-1) vs. No. 1 Banks (10-1), 6 p.m., Hillsboro Stadium: The Cowapa League rivals meet to decide state supremacy. In a league game Oct. 12 at Seaside, Banks held the Seagulls to 232 yards – half their average at the time – to win 10-7. The Braves limited Seaside senior tailback Alexander Teubner to 107 yards, 56 on one play. The Seagulls had a chance to win after reaching the Banks 10-yard line with 30 seconds left, but the Braves turned them back. Teubner, who has rushed for 2,217 yards, is one of the leading candidates for 4A offensive player of the year. In a 23-19 semifinal win over Gladstone, he rushed for 168 yards and one touchdown and threw a halfback pass for a score. Banks has one of the best passing games in 4A, led by senior quarterback Hayden Vandehey, who has passed for 2,843 yards and 32 touchdowns, giving him 62 touchdowns in two seasons. His main targets are seniors Blake Markham (55 catches, 1,021 yards, nine touchdowns) and Blake Gobel (41 catches, 601 yards, 13 touchdowns). Vandehey has thrown a touchdown pass in every game except against Seaside. Banks, runner-up in 2008, is going for its first title. Seaside has not appeared in the final since winning the 1994 championship.

No. 3 Cascade Christian (11-1) vs. No. 1 Rainier (12-0), 3:30 p.m., Cottage Grove HS: Two of the state’s best dual-threat quarterbacks face off as reigning champion Cascade Christian meets the unbeaten Columbians. Challengers junior Kiegan Schaan has passed for 2,309 yards and 29 touchdowns and run for 714 yards and 15 scores. Rainier senior Joey Tripp has run for 2,119 yards and 29 touchdowns and passed for 16 scores. Schaan is the brother of Haiden Schaan, who accounted for 53 touchdowns in quarterbacking the Challengers to the title last year. Tripp is one of seven brothers to play football for Rainier, including Kenney Tripp, a freshman receiver on the team. Cascade Christian trailed No. 2 Amity 24-13 in the semifinals before reeling off 36 consecutive points to win 49-24. Senior John Fralich, who leads the team with 10 touchdown catches, started the rally by returning a kickoff for a score. Rainier’s biggest test this season was a 60-54 overtime win over Amity. Cascade Christian is going for its fourth title since 2006. Rainier’s only title came in 2010.

No. 10 Kennedy (10-2) vs. No. 5 Santiam (10-1), 12 p.m., Cottage Grove HS: The Trojans and Wolverines face off in an all-Tri-River Conference final. Santiam beat Kennedy 44-0 in Week 3, throwing only one pass and running for 341 yards. In that game, the Wolverines held the Trojans to 132 total yards, limiting standout junior tailback Emorej Lynk to 68 yards on 12 carries. Santiam, which lost to Monroe/Triangle Lake 36-22 in last year’s final, has not won a title since going back-to-back in 1971 and 1972. The Wolverines have a first-year coach in Carl Rupp, an assistant with the team the last two seasons. Santiam is allowing 7.5 points per game, lowest in the state for all 11-man teams. The Wolverines’ rushing attack is led by senior Trevor Tinney (1,688 yards, 30 touchdowns) and junior Brody Davidson (1,163 yards, 17 touchdowns). Kennedy has not won a title, finishing runner-up four times, most recently in 2015, when it lost to Heppner 48-0 in the final. The Trojans beat No. 2 Sheridan 27-6 in the quarterfinals, avenging a 44-7 league defeat. The 6-3, 210-pound Lynk has rushed for 1,445 yards and 21 touchdowns.