Football: Rainier caps undefeated season with 3A title
Tweet
The Columbians pound it on the ground to overwhelm Cascade Christian 44-14
November 24, 2018 by Norm Maves Jr., OSAAtoday 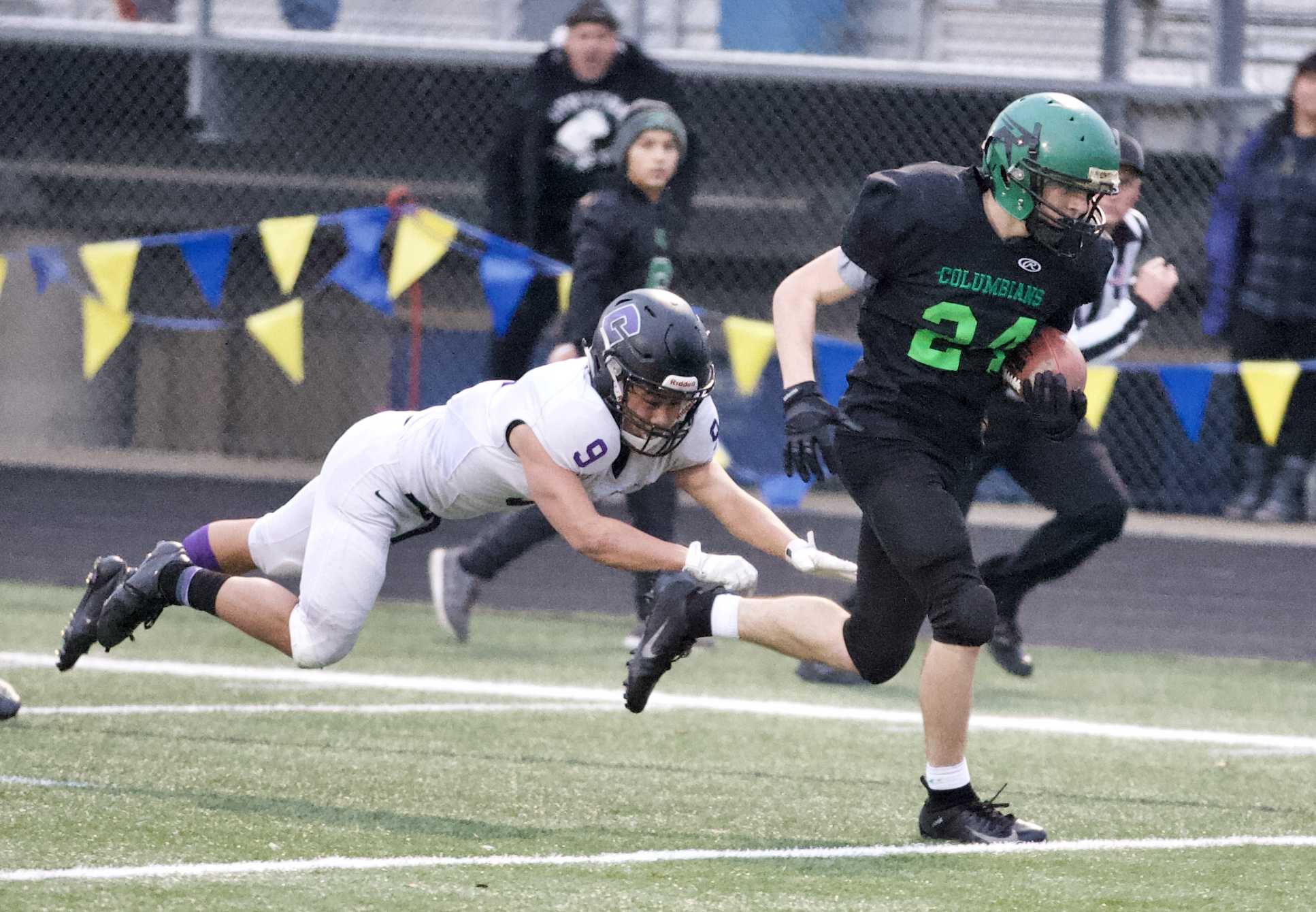 COTTAGE GROVE — Football at Rainier this season has been pretty simple: Unleash The Beast at the opening kickoff and eventually it will devour anything in its path.

The formula worked for the 13th straight time at Cottage Grove High School on Saturday afternoon. The Columbians danced with Cascade Christian for a half of the OSAA 3A football championship game, then hit the Challengers like a landslide for a 44-14 victory — and a perfect 13-0 season.

“Thirteen-and-oh,” Rainier coach Mike King told his team at the end of the game. “How many teams can say that?”

Well, Alabama, for one. And the comparison might be valid. Some teams — Amity and Clatskanie — stayed with the Columbians for a while but they, too, eventually disappeared under Rainier wheels.

Senior quarterback Joey Tripp rushed for 261 yards and two touchdowns on 34 carries. Junior tailback David Katon added 175 yards and four scores on 24 carries as the Columbians rushed for 444 of their 448 yards.

The Columbians live in kind of a perpetual beast mode. Numerically, it looks like this: Rainier ran 67 plays from scrimmage against Cascade Christian. Sixty-four of them were runs. About two-thirds of those were on a play they call “diesel.”

It’s about as subtle as a Claymore mine. They line up double tight with two up-backs who never carry the ball and a tailback. At the direct snap, the two up-backs charge, the line muscles up and the tailback runs straight ahead.

The other play is a simple sweep. The Columbians use it when the other team puts its entire roster in the trench.

Between the two plays, the Columbians pounded a good Cascade Christian defense into submission.

But it did take awhile. The Challengers, whose 11-2 record is no slouch, either, are fast up and down the line.

They even got the first-half drop on Rainier. The Columbians got the first score, then missed the two-point conversion.

Cascade came right back with a 61-yard drive that ended with wide receiver John Fralich getting loose behind the Rainier secondary and quarterback Kiegan Schaan finding him with a 30-yard pass. The extra point gave Medford team the lead at the quarter.

The Challengers upped the ante next when sophomore Kristian Fralich sprinted around the Columbians on a fly sweep from 23 yards out.

Katon tied it up 1:54 before halftime when he blasted through three tackles on a 16-yard sweep and Tripp added the two-pointer.

That was enough for the Columbians. They have had a tendency all year of coming out with monster second halves.

They did it here, too. Tripp — the diesel engine that drives the Rainier machine — sparked the drive that put the Columbians ahead for good the first time they touched the ball in the third quarter.

On a second-down play from the Cascade 43, he exploded out of “diesel” and took off for the end zone. A late tackle got him at the Cascade one, but Katon ran it in on the next play.

The dream ended in the fourth quarter for the Challengers. Katon scored twice in 29 seconds — with a Devion Godfrey interception in between — and it was over.

These particular Columbians have been playing together in the same system for years. What made this group stand out?

“If I knew, I’d win the state championship every year,” King said. “It’s a certain kind of selflessness. Nobody cares who gets the glory. They’re big and physical and they pay like it.”

When did he see this team coming? It’s hard to tell.

“Maybe in the semifinals last year,” King said, not entirely sure if it was the right answer. “When they were freshman they were OK, but they got thrown into a lot of situations. As sophomores other guys transferred in.

“Last year in the semifinals, they might have come together. This is a really tight knit group. I knew we’d be good up front. The question mark was the skill guys.”

There are no more questions. The Beast rests.