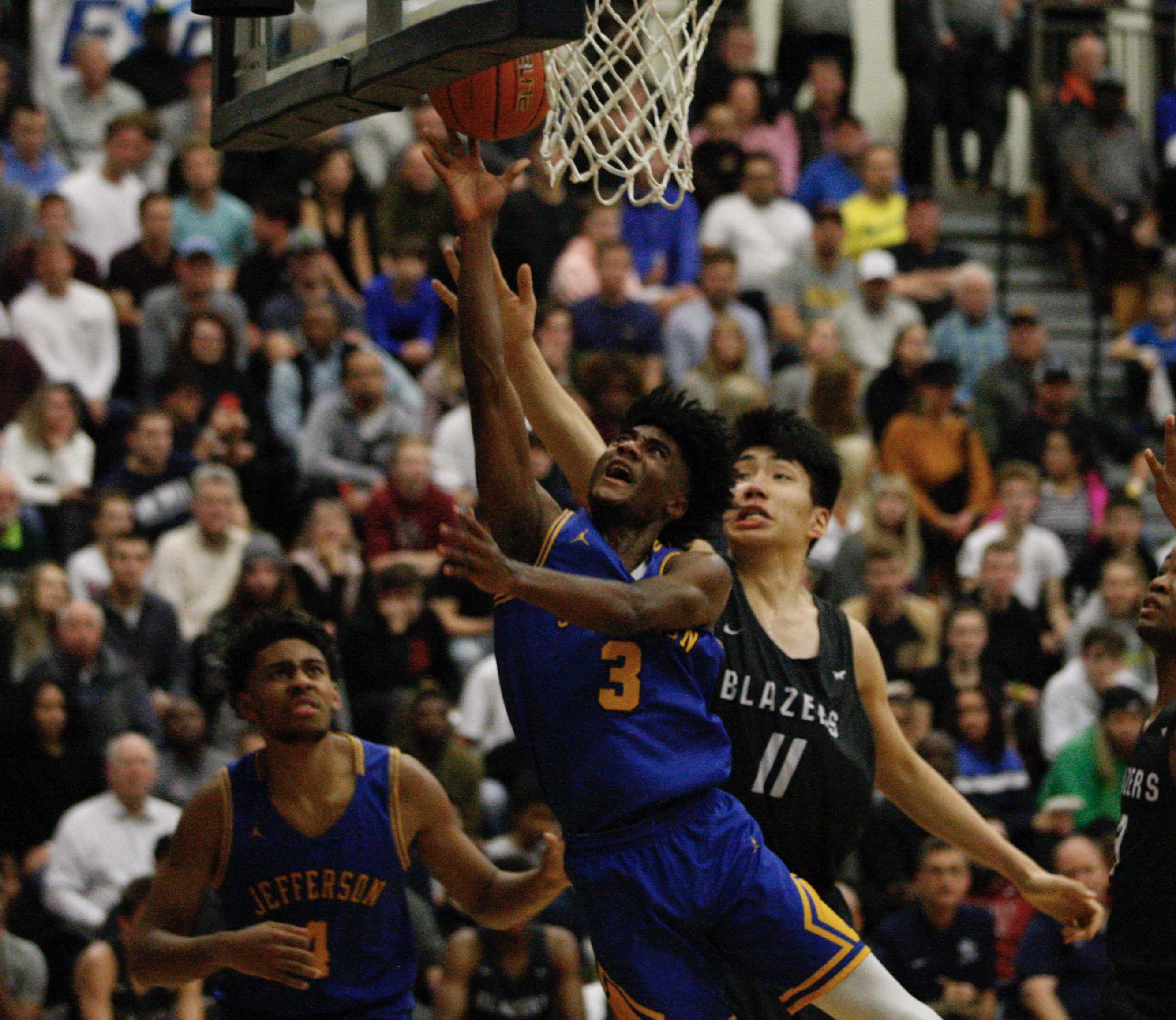 Jefferson's 6-4 Jalen Brown slashes past 7-2 Jia-Hao Yu of Sierra Canyon on his way to a layup. (Photo by Norm Maves Jr.)

HILLSBORO — If Jefferson got anything at all out of Friday night’s 68-51 loss to mighty Sierra Canyon in the semifinals of the Les Schwab Invitational boys basketball tournament at Liberty High School, it was a lesson plan and a road map for the next couple of weeks.

Democrats coach Pat Strickland issued what sounded like a warning to his team.

There was no shame in losing to the talented Californians. It was the way it happened that bothered Strickland. The Jefferson team that destroyed West Linn by 22 in the quarterfinals on Thursday and played its best game of the year played anything but against Sierra.

“We reverted back to the team we didn’t want to be tonight,” he said. “We were the team that couldn’t match the other team’s energy level, the team that didn’t do the basic things to help us stay in the game.

“Boxing out … taking good shots … helping your teammates get better. We didn’t give ourselves a chance to win, let alone play a top team like that.”

Indeed, the Blazers are ranked seventh in the country in the USA Today poll. They start five seniors — four of whom have Division I scholarships waiting for them. They open with 6-10 Christian Koloko, an Arizona signee, at center; when they spell him they run 7-2 sophomore Jia-Hao Yu into the lineup.

The Democrats started out well enough. They got a pair of three-pointers and a layup in the first four minutes, and when Marcus Tsohonis dropped a three-ball from the right side with 3:39 left in the first period, they had an 8-6 lead.

That was it, though. Kenyon Martin Jr. scrapped for a couple of layups, Cassius Stanley hit a pair of free throws and Scotty Pippen Jr. hit a three-pointer over the next 3:47 and the nine-point run put the Blazers up for good.

The Democrats got a 7-2 burst in the second quarter that got them to within 27-21, but the Blazers scored the last six points of the half for a 33-21 lead, and that was it.

Sierra Canyon fended off a few brief Democrat rallies and ran the lead up to as much as 21 points in the second half.

For all of Strickland’s lamentations about the things the Democrats didn’t do, there was the obvious talent difference between the two teams. The Blazers got runouts just about any time they wanted them, and released a wing downcourt when the Demos shot the ball.

Thus, they got seven impressive slams and could have had a few more. The Democrats didn’t get one until their last basket of the game.

Jeff’s biggest problem was Objective No. 1: Shoot the ball. The Demos hit just 17 of 65 shots for a bursitic 26.2 percent. A lot of that came from the Blazers’ intimidating defense. They had eight blocks — six of them by the 6-7 Martin, who swatted the ball around as if it was a tennis match instead of a basketball game.

Tsohonis worked as hard as he ever has to get 20 points, but he hit just seven of 19 shots to get it. The Blazers threw two defenders at him nearly every time down the court.

“We weren’t making our shots,” he said, “and that kind of hurt us. We played a little timid, and you can’t come out and do that against a ranked team.

“They played D on me with their perimeter guys and made me back up. But the shots were the biggest thing.”

Jalen Brown added 10 for the Democrats. Pippen led the Blazers with 18 points; Stanley and Martin added 12 each and Koloko finished with 10.

The Demos did one thing well — the same thing they do well against just about everybody: They out rebounded the Blazers 44-43, led by 10 from Jonathan Nchekwube.