Centennial Stories: Kim Hill, Oregon’s only volleyball Olympian
Tweet
From 2A Portland Christian to among the best in the world, Kim Hill continues to defy the odds
August 26, 2018 by John Tawa, OSAAtoday 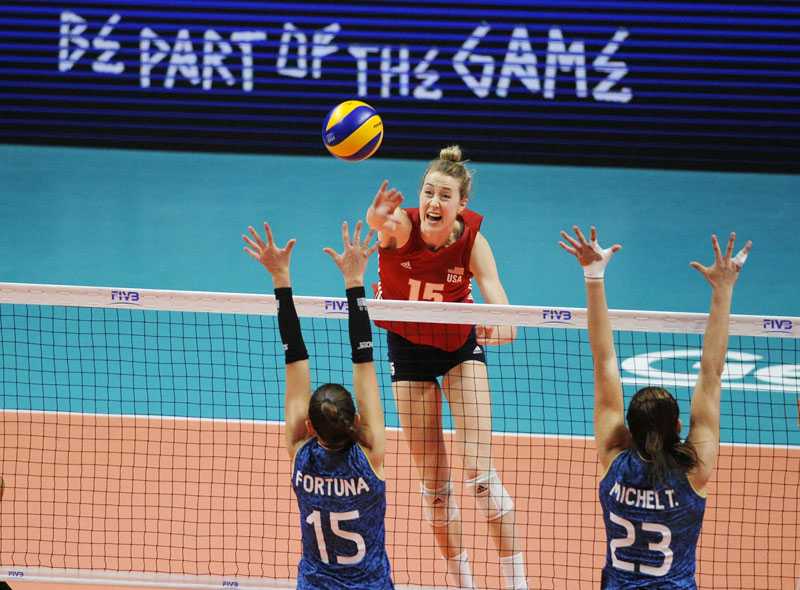 Kim Hill attacks from the back row for the US Women's National Team. Tokyo 2020 here she comes! Photo courtesy FIVB

Kim Hill was a tall, gangly 15-year-old sophomore when Jim Hartner, one of the founding fathers of club volleyball in the state of Oregon, predicted that she’d soon develop into one of the nation’s best. Hartner is prone to hyperbole, but he was right on about Hill who, at the time was starring in both volleyball and basketball at tiny Portland Christian.

Before Hill was even a high school senior, she’d been hailed as Oregon’s 2A POY in both sports and had a bright future in volleyball as a Pepperdine University recruit. Here’s what I wrote about Hill at PrepVolleyball.com when I announced her as the No. 8 recruit nationally in the high school Class of 2008:

“This kid is tough! Who else do you know who takes a ball off the face, bleeds all over the court and then leads her team back in a double final to win the 17s championship at the Volleyball Festival? Hill, Oregon’s 2A Player of the Year in volleyball AND basketball a year ago and two-time Festival champion with Nike Northwest Juniors, can do it all: pass, dig, hit and block. Better yet, she bleeds for her team! A middle who plays all the way around, Hill possesses the best ball control skills for a kid her size in this class. She is skinny but attacks with power from the front and back row, is a quiet but effective leader and has court savvy well beyond her tender years. Hill will make an immediate impact for the Pepperdine Waves and could be moved to the outside, which is a scary thought with her terminating and blocking skills. This kid will be a force at the collegiate level from the moment she steps on the court.”

Hill’s career at Pepperdine was everything it was expected to be. She finished with 1,300 kills and almost 400 blocks, was named West Coast Conference Player of the Year as a senior in 2011 and earned All-America honors both for her play indoors and on the beach. Hill, who still plays professionally today, achieved a lifelong dream in 2016 when she was selected as a six-rotation outside hitter for the U.S.A. Women’s Olympic Team, which won the Bronze Medal in Rio de Janeiro. Hill is the only Oregonian ever to play volleyball for the U.S.A. in the Olympic Games.

As part of its Centennial Stories, Hill, an Oregonian born and bred, recently sat down with OSAAtoday to discuss how she got started in volleyball, her Olympic experience and what lies ahead.

OSAAtoday: How did you come by volleyball? At what age did you start?

Kim Hill: I think I was 13 when I started playing. I actually played soccer and basketball and a little softball, and eventually started literally outgrowing soccer. I have three older sisters, and one of them, Caitlin, played volleyball. As soccer is a fall sport, I needed a replacement and volleyball seemed like the perfect fit! So my sister practiced passing and other basic volleyball skills in the back yard and I went to a tryout and made the team.

OSAAtoday: Were you always good at volleyball? At what age did you think you had a chance to play collegiately?

Hill: I picked volleyball up relatively quickly, having a kind of basic athleticism, but really fell in love with it I think freshman year of high school. Then sophomore year, I joined a high level club and was kind of surprised at all the attention I was getting from colleges.

OSAAtoday: What was it like playing at a 2A school like Portland Christian, where it wasn’t too hard to dominate? What did you learn about yourself playing small school ball in Oregon?

Hill: Playing at PC was SO FUN. My club team was serious, but PC was more so just having fun with my friends, and dominating was pretty fun too! I’m so glad I went to a small school because I was able to do all sorts of extra-curriculars, and even play basketball all four years of high school whereas if I’d gone to a big school I wouldn’t have been able to. I think that helped me develop into a more well-rounded person, without putting all my eggs in the volleyball basket and getting burnt out by age 19, like lots of girls do.

OSAAtoday: How did playing volleyball in Oregon hurt or help you as you prepared to tackle college at Pepperdine? You played middle for a long time in high school…did that benefit you in your move to the outside?

Hill: I’m lucky. I had a few really good coaches in high school and club, so I didn’t feel like I was too terribly behind developmentally going into Pepperdine. Yet, the college game is completely different of course, so that was an adjustment. I was a middle who played all the way around in high school and in college was put into the more traditional role of a purely front row middle, which was an adjustment for me, coming out of the game for half of the rotations. I ended up moving to opposite my junior year of college only because we had an injury which left a big gap on the right side. That kind of eased me into my transition to an outside.

OSAAtoday: How were you able to hone your passing and defensive skills while concentrating on the middle blocker position as a youngster?

Hill: Again, I was really lucky to have coaches in high school who believed in my abilities as both a passer and a defender and let me stay in the back row. I honestly never knew that was such a rarity until I went to college. I just kind of did what was asked of me.

OSAAtoday: When did it become realistic to think that you could make the National Team and vie for a spot playing for the USA in Rio?

Hill: Well I went to a tryout for the team on a whim while I was at Pepperdine, with no hope of actually making the team. I was just kind of going for the experience. I was shocked when I got an email from National Team Coach Karch Kiraly, inviting me on an extended tryout that summer of 2013. I think after my first tournament with Team USA that summer, I realized I really was on the team and had the clear goal of Rio.

OSAAtoday: Can you describe your Olympic experience for me?

Hill: It’s honestly hard to put into words. The week or two leading up to the first matches was insane. From processing in Houston and getting bags full of clothes from Nike and Ralph Lauren to the opening ceremonies, there were so many surreal experiences. I had watched the opening ceremonies on TV how many times growing up, and being there brought me to tears. Once the tournament started, it felt really kind of like any other tournament. We were secluded, opting to stay in a hotel over the athlete village, so all the Olympic hype kind of stopped once we were playing. The medal ceremony was again incredible, as well as spending time with all of our families in a tournament setting. Usually we’re traveling the world and playing in front of foreign crowds, so to have our friends and family there cheering was so, so special. I wish I could bottle up the feelings from those few weeks because there’s truly nothing like it, playing at the pinnacle of athletics, knowing you are surrounded by the best of the best in the entire world.

OSAAtoday: What are you doing with yourself these days?

Hill: I am still playing for Team USA, with the end goal being Tokyo 2020. We train and have big tournaments every summer, this summer being World Championships, which we won back in 2014. The rest of the year I’m playing abroad for a club team, most recently playing in Italy and I’ll head back to the same team this fall. There obviously isn’t a professional league here in the US, so to make a living as well as keep improving, we have to go play in leagues around the world, everywhere from Europe to Asia to South America.

OSAAtoday: What words would you have for younger Oregonians that have collegiate and/or Olympic dreams?

Hill: I would tell everyone that they have a shot. I never ever imagined playing in the Olympics when I was young, but I kind of just kept moving, step by step, and ended up here! I think the biggest things young players have to be is coachable and be students of the game. Even at our level we are learning and trying to grow every day. If you focus on getting a little better at something each day, the end goal will take care of itself.