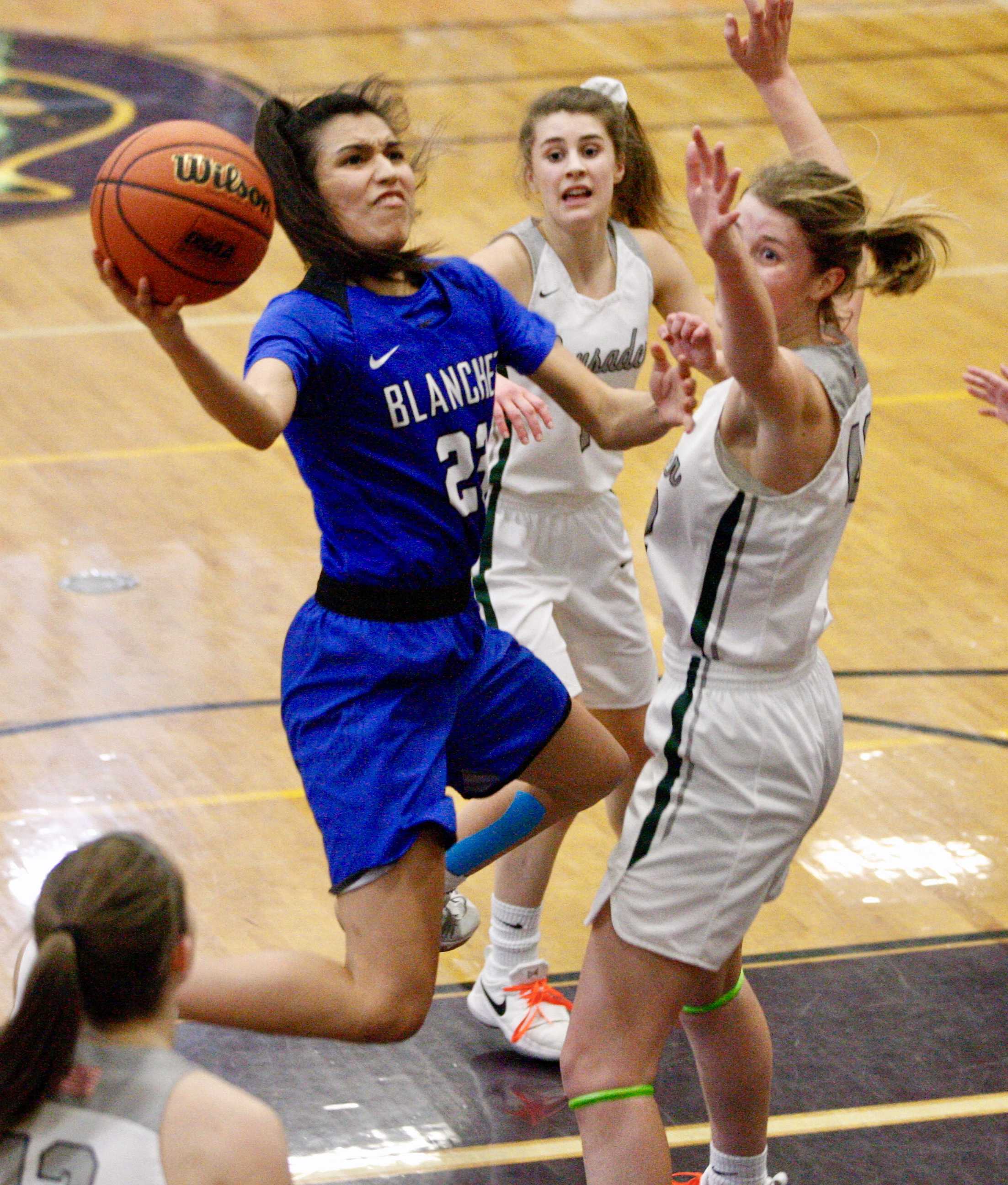 COOS BAY — Clatskanie and Blanchet Catholic of Salem each produced a victory over a higher seed Friday night and will face off Saturday for the OSAA/OnPoint Community Credit Union 3A state championship.

Fourth-seeded Clatskanie jumped all over top seed Burns, built a 19-point lead in the second half and coasted to a 47-39 victory. Blanchet Catholic beat PacWest Conference rival Salem Academy 37-32 when it mattered.

The two play at 9 p.m. Friday for the state championship.

Clatskanie 47, Burns 39: It wasn’t nearly as close as the final score seems to indicate — and it wasn’t an upset, either.

The fourth-seeded Tigers announced their presence early in the game, then beat the top-seeded Hilanders everywhere the Eastern Oregon League champions are good: From the three-point line, on the backboards, in the open court and on defense.

“If we play well,” Tigers’ coach John Blodgett said, “I think we can play with anybody. And I think we played really well today.

“I thought our execution was really great. I thought our defense was good. All our players were engaged. I can only think of four or five games this year when we’ve played this well.”

Clatskanie (20-4) started playing well at the very beginning of the game. Olivia Sprague drained a three-pointer 15 seconds into the game to light a 10-3 stick of dynamite, and the Tigers never trailed after that.

The Tigers were getting scoring from everywhere. All their starters were on the scoreboard by the midway point of the first quarter, by which time Clatskanie was in command by six points.

Of course, the Hilanders didn’t get to be the first seed in the tournament by being helpless, and sure enough they staged a comeback late in the second quarter. An 8-2 spree got them to within a single point before Tiger free throws created a 26-22 halftime lead.

The game got out of control right off the first third-quarter dribble, when the Tigers scored the first ten points of the period for a 14-point lead.

The Hilanders collapsed, and when Sprague scored from the key with 4:19 left in the game, the Tigers were up 46-27.

They scored exactly one free throw the rest of the way. The Hilanders scrambled to finish with a 12-1 run to make the score respectable.

“I thought maybe we were looking ahead to the victory there,” Blodgett said.

Alexis Smith led the balanced Tigers with 13 points. Sprague added 11, and Shelby Blodgett had the biggest line of the night — 11 points, 15 rebounds and six assists.

Blanchet Catholic 37, Salem Academy 32: There wasn’t a darn thing either team didn’t already know about each other by the time they tipped it off Friday night. It was the fourth meeting between the two teams.

The key to stopping Salem Academy was to find a way to contain their 007-dangerous all-around guard, Kirsten Koehnke. And wherever Good Ship Blanchet was headed, senior points guard Ana Coronado was going to steer it.

So there were no surprises between the two. Only hard-nosed, low-scoring basketball.

But this time, Blanchet Catholic got the early drop on the Crusaders. It was a crawl, but it mattered.

Coronado and Hailey Ostby split the Cavaliers’ first six points in the first five minutes, and all the Crusaders could show for the same time was an early layup — and it was not by Koehnke.

“We were definitely a little more comfortable,” Coronado said afterward. “We remembered that we were down by eight to Vale and had to come back. Here, it was nice to build a lead.

“We knew that this was the last chance to do what we wanted to do. And, yes, it was revenge for them beating us for the league championship.

“And to tell you the truth, it seemed like more of a championship tonight.”

The assignment of shadowing Koehnke fell to Bailey Hittner, who stapled herself to Koehnke’s jersey all night long. No matter where Koehnke went, Hittner was there.

So the splendid little guard had to work for every one of her 17 points.

In the meantime, the Cavaliers were getting solid production from Ostby and Trinity Phipps — especially under the basket, where the Crusaders have a slight size edge.

The closest the Crusaders got after the early doldrums was 22-21 late in the third quarter — the kind of range from which Koehnke can deal a death blow from the three-point line — but the Caveliers fought them off with an 11-2 rally that seemed to put the game on ice with five minute to go.

But Koehnke hit a rainbow three-pointer, then a four-point play when Hittner fouled her on a good three, and with 3:33 to go, the Crusaders were within three.

But they got no closer. Coronado drove for a layup, and Hittner would enough strength in her arms to hit two free throws to seal the game with 22 seconds left.