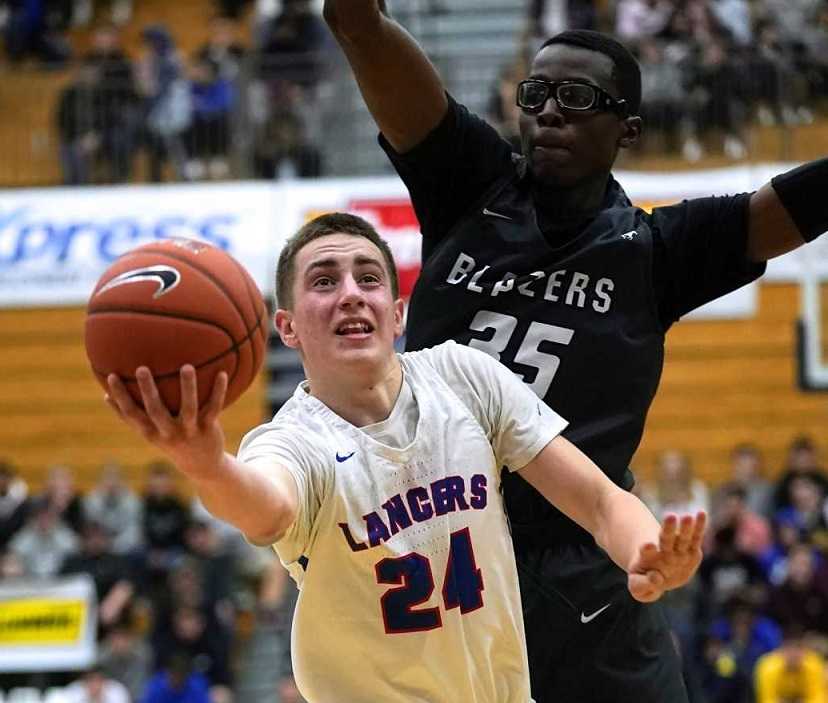 Churchill's Brian Goracke (24), a transfer from 2A Monroe, is averaging 15 points per game. (Photo by Jon Olson)

The way Churchill’s boys basketball team is shooting this season, opponents are ducking for cover.

There are times when the Lancers seemingly can’t miss, such as Friday’s playoff win over The Dalles when they made eight three-pointers in a 37-point third quarter, part of a 100-54 rout.

“As long as we share the ball, make the extra pass, get our feet set, we have a lot of guys that can put the ball in,” Churchill coach Kelly Bokn said. “That puts a lot of pressure on teams. Our team gets pretty excited when we see teams try to zone us.”

Churchill (21-4) is making nearly eight three-pointers per game and shooting 42 percent from behind the arc. So beating the top-seeded Lancers in the OSAA / OnPoint Community Credit Union 5A tournament this week at Gill Coliseum is going to require staunch perimeter defense, and a little luck wouldn’t hurt, either.

The Lancers, going for their first title since 2001, are in the tournament for the eighth consecutive year. Runners-up in 2013, 2014 and 2017, they lost in the semifinals last year.

Churchill has only one senior on its roster, but is loaded with juniors who played in the tournament last year, including two who started in guards Silas Bennion and Isaiah Wallace. The addition of junior wing Brian Goracke, a transfer from 2A Monroe, and the return of junior wing Kaelan O’Neil, who missed last year’s tournament with mononucleosis, has supercharged the attack.

“I knew that we would be very dangerous, but I didn’t know how consistent we would be,” Bokn said of his expectations entering the season. “Fortunately, we’ve shown that we’re pretty consistent. We have enough offensive firepower that if enough guys aren’t shooting the ball well, there’s enough other gifted offensive players that can pick up the slack.”

Goracke and Bennion are averaging 15 points per game. O’Neil and Wallace are at 13 and 11 points, respectively, for the Lancers, who meet No. 9 seed La Salle Prep in a Wednesday quarterfinal.

“Really any of those guys on a given night can put 20 on the board pretty easy, and usually two of them do,” Bokn said.

The 6-foot-4 Goracke has been sensational at times. Against The Dalles, he scored a season-high 32 points, making 13 of 17 shots, including 4 of 7 from three-point range. He also had six steals.

“He’s had good, steady improvement,” Bokn said. “I think playing 2A basketball vs. playing 5A, it’s a totally different beast as far as coming out consistently and defending, going against good competition. He’s progressed, just understanding that you can’t just show up and shoot jumpers.”

Churchill was cruising along with an eight-game winning streak last month when it couldn’t hold a fourth-quarter lead and fell 65-57 at 6A South Eugene. The defeat was humbling.

“We probably were a little bit overly confident and maybe not being very coachable at that point,” Bokn said. “That probably couldn’t have come at a better time. I think that shook us up a little bit. We probably needed that at that time.”

Churchill went back to work and finished a perfect run through the tough Midwestern League, no small feat considering the league comprises half the tournament field in the Lancers, No. 4 Willamette, No. 5 Thurston and No. 6 Crater.

“Going into the season, we didn’t know if we’d be first or fifth in our league,” Bokn said. “There are five or six real quality teams in our league.”

No. 5 Thurston (19-5) vs. No. 4 Willamette (19-5): Thurston, which won its first title last season, returned two of the main cogs in senior guard Isaac Lange (21.0 points, 5.0 rebounds, 4.0 assists, 44 percent three-point shooting) and 6-7 senior Mason Miller (15.0 points, 9.0 rebounds). The Colts hold foes to a 5A-low 44.5 points. In the teams’ only Midwestern League meeting this season, Willamette dropped Thurston 63-59 behind 6-4 senior post Jacob Curtis, who had 17 points and 10 rebounds. Willamette has one of the state’s top sophomores in 6-2 wing Luke Smith, the nephew of former University of Oregon player A.D. Smith. The Wolverines are back in 5A after spending four seasons in 6A.

No. 6 Crater (17-8) vs. No. 3 Silverton (23-2): Crater, which made the semifinals last year, has returned to the tournament behind 6-10 sophomore Nate Bittle (20.3 points, 11.1 rebounds, 4.5 blocks). Widely regarded as a top-15 national recruit for his class, Bittle has offers from half the Pac-12. Junior point guard Jayden Vranes (8.6 points, 3.0 assists) has returned after breaking his wrist in the season opener. Silverton, the 2015 champion, enters with an 11-game winning streak. The Foxes have five players averaging in double figures, led by junior point guard David Gonzales (17.0 points) and senior Levi Nielsen (14.5 points, 13.8 rebounds).

No. 10 Pendleton (17-5) vs. No. 2 Wilsonville (24-2): The lowest seed in the tournament, the Buckaroos earned their spot by overcoming an 11-point, second-half deficit to beat Parkrose 74-73 in overtime behind 41 points from senior guard Tyler Newsom (24.5 points per game). Pendleton had 12 three-pointers in the win. The Buckaroos have a nine-game winning streak, but Wilsonville has won 17 in a row. The Wildcats have appeared in the last four finals, winning titles in 2016 and 2017. They average a 5A-high 73.3 points, led by senior point guard Jack Roche (17.2 points, 9.6 assists) and junior wings Dakota Reber (13.8 points, 5.6 rebounds) and Keegan Shivers (12.5 points). Roche was the Northwest Oregon Conference player of the year.

No. 9 Crescent Valley (15-10) vs. No. 1 Wilsonville (21-5): Wilsonville, making its first tournament appearance since 2012, leads 5A in scoring at 68.0 points per game. The Wildcats’ only loss to an Oregon team was 55-50 against Northwest Oregon Conference rival La Salle Prep, a game in which they led by 12 points in the fourth quarter. A month earlier, Wilsonville ended the Falcons’ 83-game conference winning streak. The Wildcats have an interior force in 6-2 sophomore Emilia Bishop (15.7 points, 10.6 rebounds) and a do-everything guard in sophomore Sydney Burns (12.2 points, 5.2 rebounds, 4.5 assists, 3.3 steals). Crescent Valley is led by the McClave sisters – senior Cali (14.3 points) and sophomore Ana (11.2 points) – who were key figures on the Raiders’ state-title soccer team. Crescent Valley, a quarterfinalist last year, hasn’t won a title since 1978.

No. 5 La Salle Prep (22-4) vs. No. 4 Silverton (21-3): La Salle Prep has made the semifinals the last four years, winning titles in 2015 and 2017 and finishing second last year. The Falcons have arguably the state’s best backcourt – at any level – with 5-11 sophomore Addison Wedin and 5-9 senior Alyson Miura, a USC signee who transferred from Clackamas. Wedin is averaging 21.2 points and shooting 49 percent, including 47 percent on three-pointers (67 for 144). Miura (15.3 points) has played three games since missing 2 ½ months with a shoulder injury. Silverton won the title in 2016, was runner-up in 2017 and reached the semifinals last year. Every player on the Foxes roster has attended a Silverton school since the third grade. Truitt Riley, a 6-0 sophomore, averages 13.0 points, 8.0 rebounds and 1.7 blocks.

No. 6 Churchill (20-4) vs. No. 3 Springfield (20-4): A compelling matchup featuring Midwestern League rivals who split two games this season. On one side is Churchill, which improved from 10-14 last season under first-year coach Terry Harrison, who coached Marist Catholic to the 5A title a year ago. On the other side is Springfield, which added two impact transfers from last year’s Marist Catholic team in senior guard Emma McKenney (16.5 points) and senior post Kayley Elliott (9.0 points, 6.3 rebounds). Churchill is in the tournament for the first time since finishing runner-up to Willamette in 2007. The Lancers have one of the state’s most impactful freshmen in 6-0 guard Danika Starr (16.5 points, 5.2 rebounds) and a savvy senior guard in Isis Smith (9.6 points). Churchill beat Springfield 40-36 in the first round of league play, but the Millers paid it back 50-44 on Feb. 22.