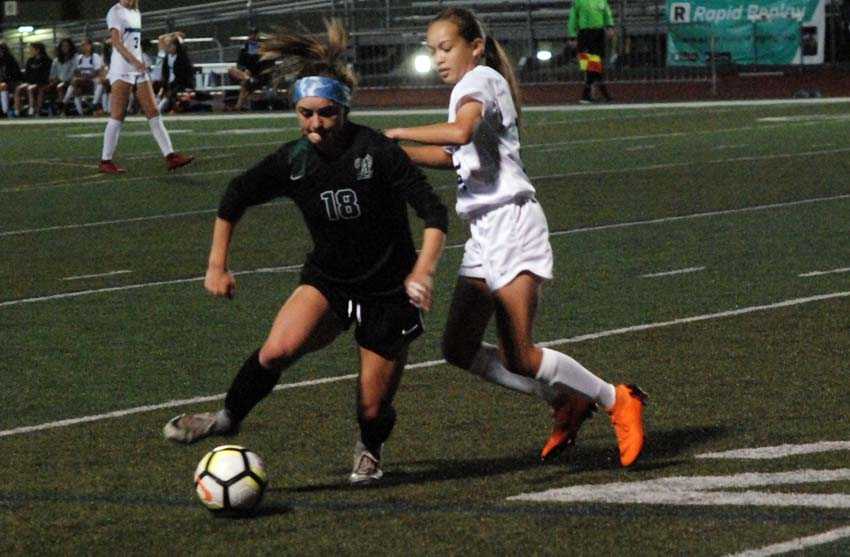 West Linn’s Rae Peters had been a defender, albeit an offensive-minded one, her entire high school career. But when Lion head coach Lauren Pyrch approached the senior before the season about switching to forward, Peters readily embraced the move.

“We have a lot of defensive players and needed to get more activity in the attacking zone,” Peters explained.

On Tuesday at home, Peters found the back of the net three times – matching her career goal total to date – in West Linn’s season-opening 3-0 win over previously-undefeated Mountainside in girls 6A soccer action.

Peters set the tone in the opening minutes of the match when she took a pass from Rosie Larsen, put the ball on her left foot from the right side of the net and put a strike from 15 yards out into the far corner. West Linn, ranked sixth in the latest OSAAtoday coaches poll, controlled the play for the remainder of the half but could not convert several additional chances.

Pyrch said that score at halftime was not representative of how much West Linn dominated, so she challenged her charges to stay on the offensive in the second half. That they did, putting constant pressure on junior keeper Sidney O’Billovich with speedy runs and crafty attacks.

For most of the half, O’Billovich and strong-footed sweeper Madeline Bowder kept West Linn from further denting the scoreboard. In the meantime, No. 4 Mountainside was mounting scoring threats of its own thanks to strong, speedy, skilled forward Nedaya Sawan. Fifteen minutes into the second stanza, the junior had a good chance at the equalizer but her shot sailed high and wide of the mark. Three minutes later, Sawan had a chance to win a one-on-one ball with West Linn goalie Alyx Burkhartzmeyer, but the senior netminder’s fancy footwork avoided a perilous situation. Thirty seconds later, Sawan again challenged to tie the score but her left footed kick from point-blank range was turned back by Burkhartzmeyer.

Mountainside (2-1) did not have any more good chances after that, as West Linn controlled the play in the midfield, thanks to strong senior Calli Masters, and was relentless in pushing the ball towards the Mavericks’ goal.

Finally, with less than a dozen minutes remaining, West Linn scored the backbreaking goal. It happened when speedy junior Jill Brody maneuvered around one attempted tackle, then another, then a third, using deft footwork, and sent a cross into the box. Peters didn’t get all of it, but enough to put it off the left post and into the net for a 2-nil lead. The score remained 2-0 until the final minute when Brody was pulled down in the box. Peters converted the penalty kick past O’Billovich, who got a hand on it but could not keep it out of the net.

“Scoring that third goal made me really happy,” said Peters, whose hat trick was the first of her career.

Pyrch said that West Linn played like it was the first match of the season. Her Lions will only get better from here on out, she said.

“The effort was there for sure in our first match,” Pyrch added. “We came out with guns a-blazing in the second half and proved who the better team was.”